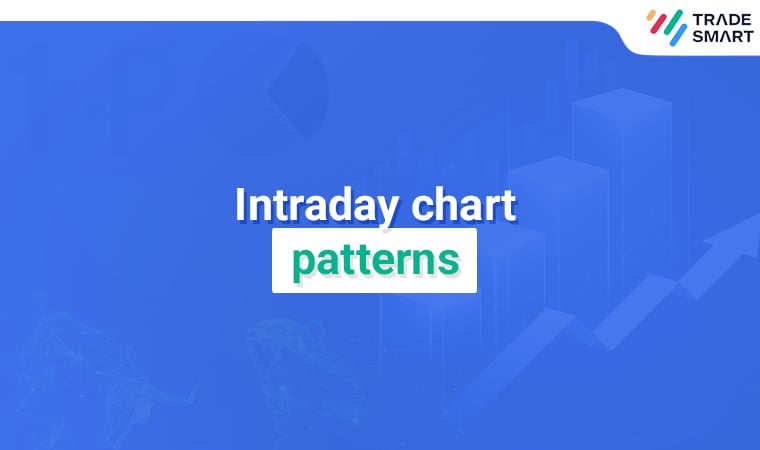 The stock market opens at 9:15 AM and closes at 3:30 PM. During this session, only certain time frames are most suitable for intraday trading. An intraday trader needs a proper framework to work within such a short window. And that’s where technical analysis plays a major role. Technical analysis involves studying charts that graphically portray the price movements. As the price action takes place, certain patterns are formed on these charts. These patterns are used by traders to place intraday bets.

Let us go ahead and learn about some of the most frequently formed chart patterns which can help build an effective trading setup.

Charts in the stock markets are a representation of how the price has moved in the past and how it is moving in the present. Based on this, traders try to predict how the price will move in the future. There are various types of charts like Candlestick, Renko, Line, Bar, Heikin Ashi, etc. Different traders use different types of charts for trading but the most commonly used chart is the candlestick chart.

On candlestick charts, many patterns are formed based on how the price has moved in the recent past. These patterns represent the price behavior which tells you a story. We will see what each type of pattern portrays.

Following are a few types of chart patterns that traders effectively use as a part of their trading setup.

Let us look at each of the patterns individually and learn how you can use these patterns to up your trading game.

In a typical head and shoulder pattern, there is a small left shoulder, then a head-like structure in the center, and a right shoulder similar to the left shoulder. The baseline of the head and shoulder pattern is often called the neckline. This is a bearish pattern which implies that the sellers are actively trying to sell whereas buyers’ attempts to take the price higher are failing. Once the neckline breaks down, the price can fall significantly lower.

A head and shoulder pattern is illustrated in the picture presented below. 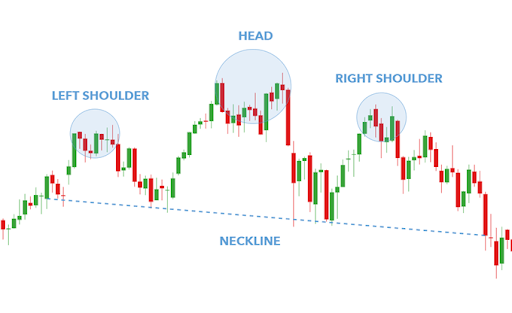 This is a bullish pattern. The cup and handle pattern implies that the sellers have taken the price lower but buyers absorbed all the selling and took the price again to the level from where it had started falling. Another way of looking at this is that the sellers’ efforts to lower the price failed as buyers entered at the lower level. This reversal of price back to the upper level after taking a u-turn looks like a cup.

After reaching the same level again, the price halts for a while and forms a pattern that looks like the handle of the cup. Once the price goes higher from this level, a significant up move can be seen, which can be traded intraday. The image below illustrates the cup and handle pattern. 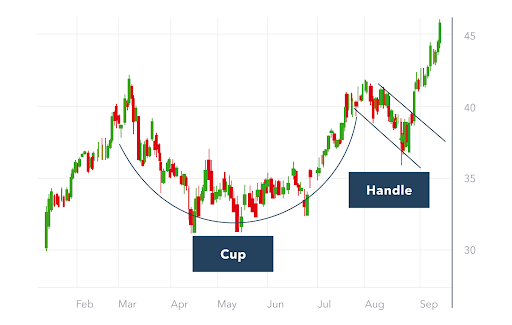 The opposite version of this pattern is the inverse cup and handle pattern, which gives a bearish signal when the price breaks down from the narrow range. 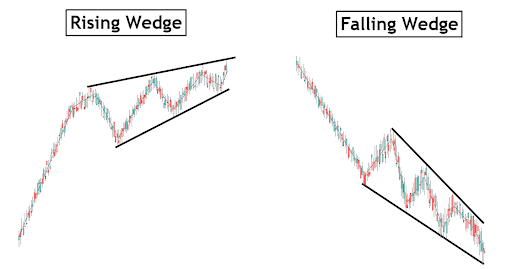 On the other hand, a falling wedge is a micro downtrend that forms when the major trend is bullish. This acts like a consolidation phase. When the price breaks out from the trendline of this wedge, it again joins the major uptrend and traders can ride the major trend. Both these patterns are illustrated in the image above.

Flag pattern comprises a pole-like structure of candles and small consolidation of the price which appears like a flag on top of the pole. This pattern again represents a consolidation phase after a one-sided sharp momentum. Although, this consolidation is a very small phase. Once the price breaks the upside of the flag, it can form another flag.

The image displayed below illustrates how the flag patterns form and how you can set the target based on the size of the flagpole. 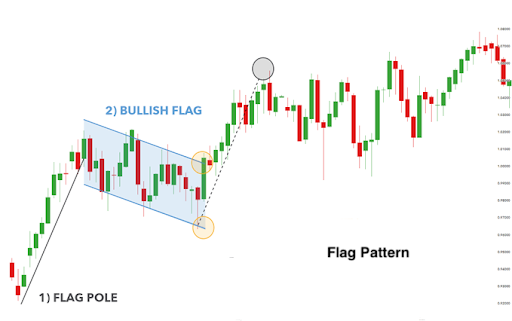 The double bottom pattern is a bullish chart pattern. In this pattern, the price makes two lows at or about the same level before it starts a bullish uptrend. The level from where the price starts to rise again becomes a support or demand zone. This is because the price has taken support at that level despite the sellers trying to take the price lower twice. As an intraday trader, you can look for buying opportunities at such a demand zone. 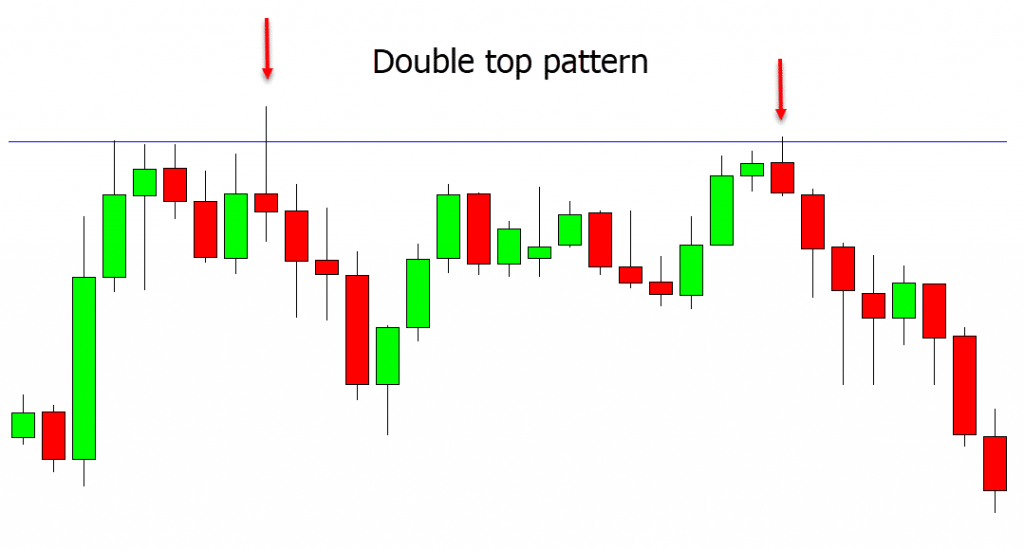 The above image illustrates an example of a double bottom bullish pattern on the real stock chart.

This is the opposite of the double bottom pattern. The double top pattern is a bearish pattern. It implies that the buyers tried taking the price higher twice but sellers were actively selling at that level. Such a level can be called a resistance or supply zone as the price resists going above that level and sellers start supplying stock when the price reaches that zone. As a trader, you can use these levels to sell the stock as the price could fall further. 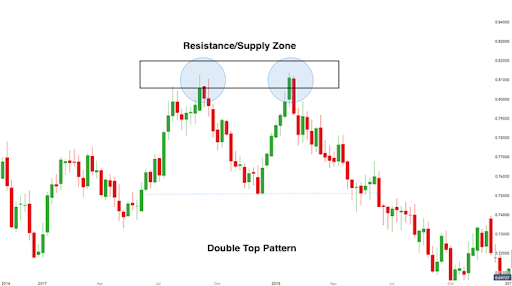 The above image illustrates how the double top pattern forms and the price moves on the downside after being rejected from the resistance zone.

There are three types of triangle patterns that form on charts. They are:

Let us look at them one by one. 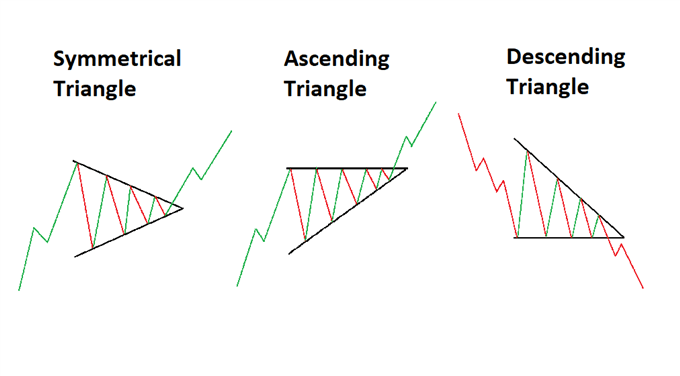 Though most of these patterns are commonly formed in intraday trading sessions and can be used effectively to trade the stocks or index, you must also take multiple confirmations with the help of some technical indicator like Moving Average, or Bollinger Bands, or Relative Strength Index (RSI), etc. TradeSmart provides you with a robust trading platform having advanced charting options which are loaded with 80+ technical indicators to choose from. You can check out TradeSmart’s website and explore the plans that offer the lowest brokerage in India.

How accurate are the intraday chart patterns?

Intraday chart patterns have an accuracy rate of about 60-70%. However, by following the right set of rules like maintaining a stop-loss order, planning a favorable risk-reward ratio, etc., you can increase this accuracy.

Is the head and shoulder pattern bullish or bearish?

Can a cup and handle pattern form as a bearish trend?

The cup and handle pattern is a bullish chart pattern. When this pattern forms on the chart intraday, you must either take a bullish position or avoid the trade. The formation of the cup and handle pattern implied that buyers have taken the charge of the price and all the selling pressure has been absorbed by the buyers because of which a rounding button has formed on the charts.

How often does the bullish and bearish flag pattern form on charts?

Can I use technical indicators along with chart patterns to trade?