What is Pledging of Shares? 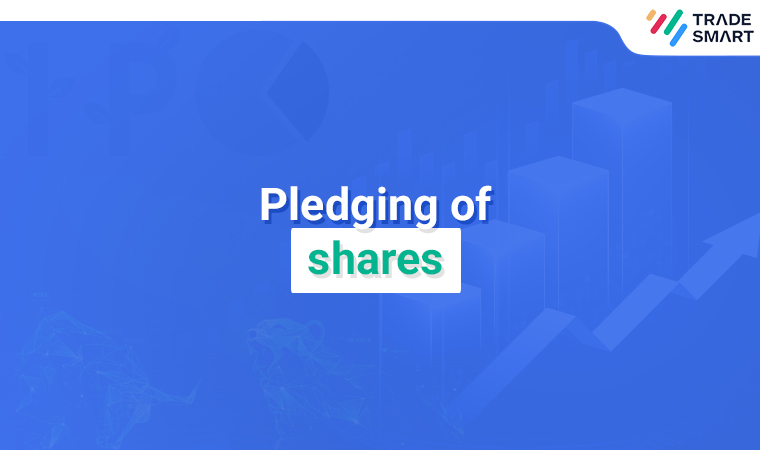 In layman’s terms, pledging of shares is nothing but taking a loan against existing shares that an investor is holding. As shares are considered as assets, this allows the promoters of a company to use their shares as collateral to complete their financial obligations. During pledging of shares, the borrower shall continue to have ownership of the shares and also continue to earn dividends on the same. Shares can be pledged for any purpose including requirement of working capital, new ventures, to trade in the equity market, futures and options, or even personal financial requirements.

Pledging is generally considered as a last resort taken by promoters in order to raise funds. A few safer bets available to promoters are through equity funding, or other loans. When promoters turn to pledging their shares, it means that they cannot raise funds by other means.

The Risk behind Pledging of Shares

When promoters pledge their shares as collateral in order to take loans, it might not cause too many problems in a positively trending market, or a bull market, as the market is moving upward, and the investor sentiment is positive. The risk arises when the market starts to fall, that is in the bear market. As the market value of the shares keeps changing on account of market fluctuations, the value of the collateral will also fluctuate as the shares fluctuate. Most contracts will require the borrowers to maintain the amount of collateral. In the case that there is a drop in the value of the shares, the borrower will be required, as agreed in the terms of the contract, to maintain the amount of collateral by pledging more shares, or by bringing in more money. If the borrower is not able to make up for the difference in the collateral amount, the pledged shares will be sold in the open market in order to recover the money.

When pledged shares are sold in the open market, there can be a chance of a great fall in the value of the share. This panic selling by other shareholders will further cause a shortfall in the collateral amount of the borrower. This can be even more disastrous to the borrower, because as the price falls, the borrower will have to pledge more and more shares, or bring in more and more capital to make up for the shortfall in the collateral amount.  Additionally a selloff of pledged shares can lead to a change in the shareholder pattern of the company. This can affect their voting powers in the company, and they may not be able to make critical decisions on behalf of the company.

It is advisable for retail investors to avoid companies who have a high pledging percentage, so as to avoid unnecessary trouble. As pledging of shares shows that the company has a low cash flow, low credibility, high debt, and that they are unable to meet their short term requirements.

Pledging of shares is not always a negative point for a company. A lot of companies are able to recover the pledged amount from their borrowers, and sometimes the amount borrowed is used to better the company itself, including new products, services and even new projects. These can oftentimes create a huge boost for companies.  If companies have a good and increasing operating cash flow, and good future prospects, then it is not a big concern if their shares are pledged. In these cases pledging of shares helps in expanding the growth and revenue of the company. It is not a big problem if the companies whose shares are pledged are a fundamentally sound company.  Shares pledged in small quantities are easy to manage, but the problem arises when there are too many shares pledged.

Is Pledging of Shares good or bad?

When promoters pledge their shares in a company, as collateral with a financial institution,  so that they can raise money, it is referred to as pledging of shares. A high pledged proportion of an organization could be an unhealthy sign. Investors ought to stay away from companies who have a high pledge percentage.

What happens when Companies Pledge Shares?

Companies can raise funds by applying for loans, or by issuing debt or equity shares. By pledging their shares, promoters use their shares as collateral to borrow loans to meet their operational requirements. It can also be used to finance new ventures, to meet working capital requirements, etc

How can I check if a stock is pledged?

You can track your pledged holdings in the “Statement of Transaction” provided by the CDSL. In the statement, you will find the pledged shares as a “Debit”.

How to find the pledging of shares for Indian companies?

The process is pretty simple and is listed below.