The History of the Bitcoin 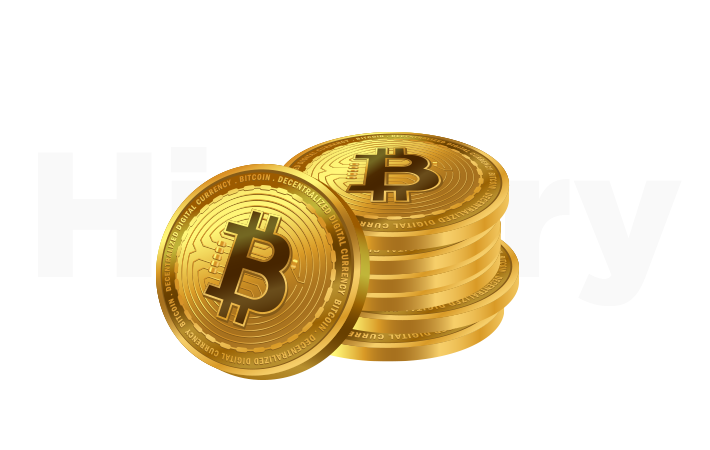 The history of the Bitcoin

If you’re like most people, when you think of cryptocurrencies, one of the first words you’ll recall is ‘Bitcoin.’ That’s quite understandable, because although we have a large variety of cryptocurrencies today, Bitcoin will always be the original cryptocurrency. In many ways, this was the currency that introduced most people to the world of blockchains and digital assets.

Today, we’ll take a little trip back in time and trace the history of Bitcoin.

The origin: When was Bitcoin first created?

The idea behind this cryptocurrency can be traced back to 2008. Now, over a decade later, the true origins of Bitcoin are still shrouded in mystery, because nobody knows who the original creator of the currency is. Still, credit is popularly given to Satoshi Nakamoto – a pseudonymous person who is widely regarded as the person who created Bitcoin. Here’s the timeline tracing the history of Bitcoin.

This was when Bitcoin first arrived on the scene. The domain name bitcoin.org was first registered on 18 August 2008. And then, in October that year, Nakamoto put the idea for Bitcoin out into the world in the form of a white paper titled “Bitcoin: A Peer-to-Peer Electronic Cash System.” The paper went into the details of how Bitcoin would be a transparent and decentralized digital currency. Although the idea for such a currency was not new to the world, the white paper gave a concrete framework to what was just an idea up until then.

In 2009, the Bitcoin network was created and the process of mining Bitcoin began. The blockchain for this cryptocurrency was launched and the first block, known as the genesis block, was mined to create Bitcoin. In fact, the genesis block was mined by Satoshi Nakamoto himself (or herself), and it came with a reward of 50 Bitcoins.

The following text was embedded in the coinbase:

‘The Times Jan/03/2009 Chancellor on brink of second bailout for banks.’

This may seem cryptic, but the note was simply a headline in The Times that was published on January 3, 2009. Over the years, critics and crypto enthusiasts have interpreted this note as both a timestamp as well as a nod to the instability created by fractional reserves in banking.

Anyway, at this point, although the software for mining this asset was available to the public, Bitcoin did not have any real monetary value. In fact, that didn’t happen until the next year, in what is now famously known as the Bitcoin Pizza Day.

This was the year that Bitcoin was first used in a commercial transaction. On May 22, 2010, Laszlo Hanyecz, a Florida-based programmer, bought two Papa John’s pizzas for 10,000 Bitcoins. In fiat currency, those pizzas were worth $25. So, that essentially meant the real-world value of 1 Bitcoin was at 0.25 cents.

Or, in other words, 4 Bitcoins equaled 1 cent.

It was also in this year that a huge vulnerability was exposed in the mining of Bitcoins. Since the transactions were not adequately verified, users could circumvent the economic restrictions available and create an endless number of Bitcoins via the mining process. In August that year, more than 184 billion Bitcoins were mined in one single transaction!

With Bitcoin acquiring some kind of value, miners started to build blockchain networks to lay the foundation for other cryptocurrencies like Ethereum, Litecoin and Namecoin. These coins improved upon the code used for Blockchain, and they boasted of improved transaction speeds and better adaptability. Still, the presence of more cryptocurrencies only served to improve Bitcoin’s perceived value, eventually skyrocketing its prices to what we see today.

Bitcoin, as it appears, has had quite an interesting history so far. And although we now have thousands of cryptocurrencies in the market, Bitcoin continues to rule the roost with its popularity unchanged. And this is despite the many price changes that the digital asset has undergone.  Today, Bitcoin is still one of the most popular digital currencies. Head to the next chapter to discover present-day Bitcoin stats.