A problem that traders face is that while buying or selling a stock or index, they are not sure if they are buying at the bottom price and selling at the top. There are no defined boundaries, and prices can continue to rise or fall. With no boundaries, it becomes a risky business to venture out in the open without any defined exit rules. Fear of the unknown is rampant in the market and a big reason for failure.

There are many types of oscillators in the market, but the common theme that these oscillators follow is that they oscillate between two extremes and never cross the boundary, just like the children in the park.

The common feature of these oscillators is that their boundaries are defined between 0 and 100. All of them follow the same nomenclature of being oversold near levels closer to 0 and overbought near levels closer to 100. All of them derive the value from the price movement of the underlying instrument, which may be a stock, commodity, or any other market traded financial instrument. As a norm, oscillators are leading indicators, which means that they, like a road sign, inform us about the turn ahead.

A trader can use the oscillators to enter or buy a stock when it is oversold and sell it when it reaches the overbought level.

Why do you need an oscillator when we are trading prices?

Oscillators play the role of a speedometer in driving. When we are driving too fast, the speedometer needle goes into the red zone and the cautious driver slows down at the same time the speedometer tells him when he is below the speed limit in a fast track lane.

Though markets are all about prices, it is not easy for many traders to pick up buy and sell signals directly from the chart. The volatility and noise in the market prevent them from seeing the woods from the trees.

They need the help of other clearer indicators that hide the noise and give them a clear picture, just as a person with defective eyesight is able to see objects clearer after wearing corrective lenses.

Oscillators give a rough estimate of how far the prices are from the bottom or how far they are from the top. Though they may not always be right, they are still better than not having any way of knowing where we are.

Is it as simple as a walk in the park?

If trading was all about buying a stock when it is oversold and selling when it is overbought everyone would have been rich beyond their wildest dreams. Though the rules of trading with an oscillator are simple there is a catch.

Oscillators work very well only in a market that is trading in a range. The moment a market enters a trend – either upward or downward, the oscillators will start giving wrong signals.

This is akin to the child walking on a steep road, either uphill or downhill. When moving up he is interested in reaching the top as soon as possible rather than wasting his energy crisscrossing the road, while running downhill he is more concerned about maintaining his balance.

One would then question the utility of such oscillators if they do not work all the time. Here is a moment of truth – no oscillator or trend indicator or trading strategy in the world ever developed works all the time. Each tool is useful during a particular period or phase of the market.

Thankfully for traders, there is an oscillator that not only works well in a flat market but with a little tweaking, it can be a handy tool in a trending market too.

A Relative Strength Indicator (RSI) is known as a momentum indicator. It is an oscillator, yet a momentum indicator. What it means is that though the indicator moves in a fixed range, it is also a helpful tool in informing us about the strength of the stock with respect to others in the market but it also tells us the strength of the move in the stock with respect to a particular point of time.

A look at the construction of RSI will give a better appreciation of the tool, but first a brief history.

RSI was developed by J. Welles Wilder and introduced in his 1978 book – ‘New Concepts in Technical Trading Systems’. Since then, it has become one of the most commonly used indicators for technical analysts and traders.

The RSI is represented as a line graph, which is normally displayed below the price chart, as seen here: 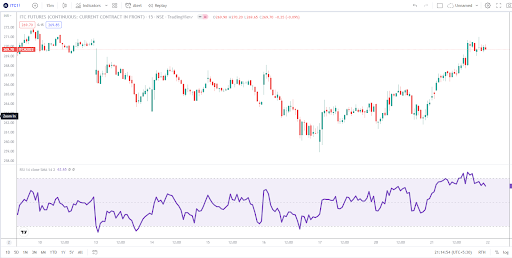 RSI is also one of the most researched oscillators. A book that is often used as a reference guide for RSI is ‘RSI: The Complete Guide’ by John Hayden. Here, the author has used the RSI to describe market trends. This work is important since oscillators have traditionally been used as tools for short-term trading. A trend indicating oscillator would mean the same indicator can be used to show overbought and oversold positions as well as to show the direction of the market.

A look under the hood

Though we use ‘Relative’ in RSI, it does mean that the value is derived relative to some other stock or index. In fact, RSI shows the strength of the stock is relative to a particular date or time period in the past.

The conventional period of checking RSI is 14 days. Here is how it works.

It calculates the average percentage gain and average loss made over the last 14 days and divides the two. Using smoothening techniques, we arrive at an RSI figure which is anywhere between 0 and 100.

If out of the last 14 days there are more days that have had positive closing and their average is higher than the number of days that have lower closing, then we would get a number that is greater than 50.

In other words, the latest RSI number incorporates the movement of the past 14 days and throws up a number based on the strength or weakness of the market. Thus, if all the recent 14 days have had a positive closing, we would be closer to an overbought situation while if all 14 days are negative, the RSI would be a number closer to the oversold line.

As the graph above shows, the RSI oscillates between 0 and 100, but very rarely does it touch these extremes.

RSI’s got the moves

Capitalising on the moves of an oscillator is the easy part when a stock is moving in a narrow range. Whenever the RSI touches a level of 30, traders normally look to enter at these levels. Astute traders look out for a support zone nearby from where the stock had rebounded back in the past or some other pattern to give a confirmation to buy.

Similarly, when a stock reaches a level of 70, traders either look to exit from their position or look for an opportunity to sell the stock short. Here the traders are looking for resistance or a pattern to confirm selling.

RSI is shown in the lower half of the chart with the defined boundaries of 0 to 100. The brown line shows levels of 30 and 70. As can be seen, RSI normally oscillates between the points of 30 and 70, which is normally considered as levels of oversold and overbought, respectively, among the traders and technical analysts.

The chart shows that every time the price touches the 30 levels; it bounces back, sometimes for a short duration but on others, it is an important turning point. The message here is that the market respects this oversold line, with a number of participants placing their bets to go long on it.

The same goes on the other end of the chart when the RSI touches or nears the 70 levels. The market has either stalled at these levels or fallen. In the chart above, there is only one incidence of the price touching the overbought level, though there are many occasions when fatigue is visible as the price reaches the 70 lines.

A point to be noted here is that the stock price can go higher or lower without a corresponding move in the RSI. This is not a reason to worry but to capitalise as traders have wisely found the power of Divergence.

Since RSI measures the strength with reference to a given point, chances are that prices will make new highs but RSI will not, or on the other hand prices will touch new lows before RSI does.

A look at the chart will help us clear the concept. 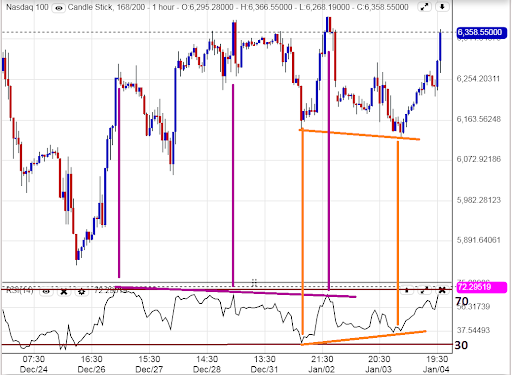 Let’s look at the purple lines first, which are all marked when the RSI has touched 70 or is nearing the 70 mark.

There was thus a clear case of divergence where the price moved higher but the RSI moved lower. Such cases point to an impending fall in prices going forward, which is visible in the second and third cases; though, in neither of them, RSI had touched the overbought level of 70.

Let’s now look at the orange line, which originated when RSI touched a low of 30. But the second time, though, prices moved marginally lower, RSI did not even touch the 30 marks. Prices rebounded on account of the divergence.

RSI in the trending market – a contradiction?

We shall now know that oscillators work very well in a flat market, but are they useless in a trending one? Ironically, traders use the RSI to find out stocks that are trending. The difference here is rather than looking at a stock’s RSI in isolation, the trader compares it with other stocks in the market.

The more skilled and disciplined traders use RSI to compare sectors first and then within it they use it to compare stocks.

Let’s say in a market, a trader sorts the RSI of various sectors. The one with the highest RSI would mean that it is trading at the highest level from where it was 14 days back. He then digs deep into the sector and looks at the companies in the sector and sorts them on the basis of RSI. Here again, he is keen only on the top ones or the strongest ones.

RSI as an indicator is a very important tool in a trader’s arsenal. It can be made stronger by adding another layer of confirmation, which can be either through chart patterns or candlestick patterns or by following simple trading rules like buying a stock that is below the RSI only if it crosses a five-day high.

Another point worth mentioning is that, like all indicators and oscillators, the RSI also works on all time frames.