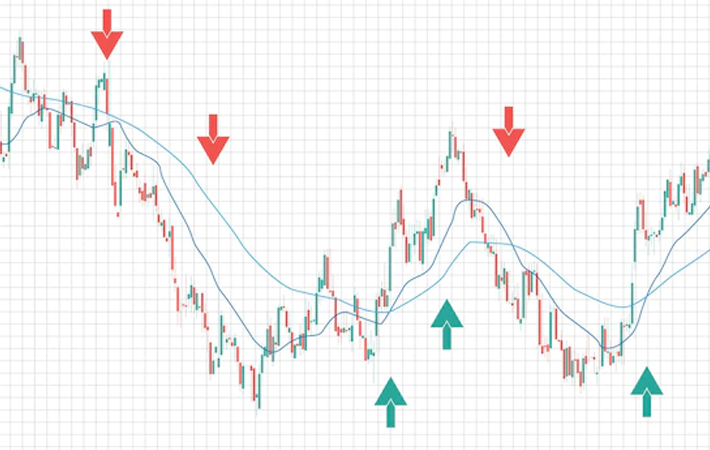 One of the first statistical tools that we learned in school was averages. Averages of marks, height, or weight of the students in the class were given as examples for us to understand the concept. Little did we know then that it is the same average that is being widely used by traders worldwide.

Traders use a modification of the average called as Moving Average. In its calculation, the latest value is taken under consideration and the oldest one is removed from the calculation.

Theoretically speaking, a moving average is a statistical calculation that helps to create a series of averages of different subsets of the full data set.

So a 10 period moving average will have a subset of 10 periods, which can be days or minutes, or hours, depending on the timeframe selected by the trader.

The advantage of doing this is that the moving average smoothens out the short-term fluctuations in the data. The holistic picture that it portrays clears all the noise and helps in understanding the trend in the underlying asset.

The moving average was calculated by taking the value of the latest entry and removing the oldest one. Note the Moving Average of the 5th day is 82.8 which is the average of the first five days. On the sixth day, when the price fell sharply lower from 83 to 74, the moving average moved from 82.8 to 81.2. While considering the moving average the data of the 6th day was taken while that of the 1st day was removed. This process is repeated throughout the data series.

To get a graphical view of the data series and moving averages, look at the chart below. 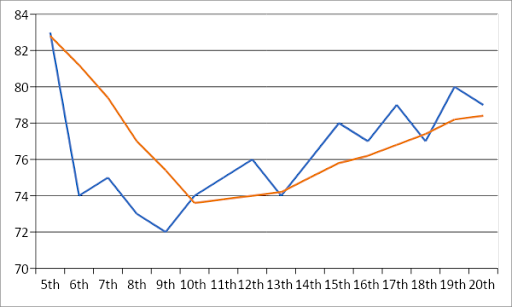 The moving average moved downward when the data was in a decreasing trend while it moved upward when data started moving higher.

There are six types of moving averages that are in use.

The chart shows Bank Nifty on a daily time frame, but the moving average can be calculated using the same calculations on any time frame.

For the mathematically inclined, here is the formula for the calculation of a simple moving average.

For the calculation g the EMA we use a multiplier in order to add weight to the recent data.

As the period is reduced the multiplier value is increased.

Knowing the value of the multiplier we can calculate the EMA by substituting it in the formula:

How to use moving averages

Moving averages are one of the most versatile tools. They can be used in isolation or in combination with more than one moving average.

The chart below shows the 200 period moving average on Nifty over a long term period.

Note how early the market gave a bearish signal during the Pandemic.

Since the 200 period moving average is widely followed, the market respects it and takes support around the average. Market tests the 200 moving average and moves above or below it.

The Golden Cross and the Death Cross are terms that are used by traders using moving averages of 200 periods and 50 periods.

While moving averages have a number of advantages, it comes with their own set of drawback. Its biggest drawback is that it is a lag indicator, which means it reacts only after the price has covered a lot of distance.

Moving averages are a simple and effective tool that finds its place in the arsenal of most traders. It is used as a trend indicator as well as a moving support resistance line.