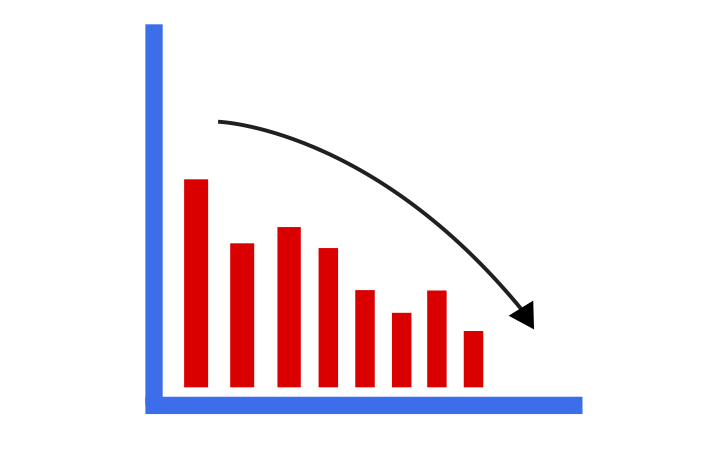 Imagine if you had an indicator that tells you beforehand that the market is going to change its trend and move in the opposite direction, more often than not.

Stochastic is one such indicator. It is called a lead indicator because it foretells the change in trend.

A vehicle moving at 100 km per hour has to be stopped applying brakes it would still travel some distance before coming to a grinding stop. The vehicle would first lose momentum and on then will it halt. Similarly, if it goes through a hairpin bend the driver would first cut down the momentum of the vehicle by reducing its speed and then manage the turn.

Markets also exhibit similar behaviour. Very rarely do market turn in one instant. The change of power between buyers and sellers is a slow process.

Stochastic indicator works on a similar principle where the changing momentum is read as a sign of changing trend.

Stochastic is a technical indicator which measures the momentum of the underlying instrument.

Developed by George Lane in late 1950 Stochastic is an Oscillator that indicates the location of the current price with respect to the high and low of the range.

The logic of the oscillator is very simple. Whenever a stock is strongly trending up it would generally close near the high of the day’s (or the period in which it is observed) range similarly when it is in a strong downtrend the stock would close near the low of the day. In other words, the close of the day gives an idea of the battle between the bulls and bears.

According to Lane, the Stochastic indicator signifies the change in momentum and not price. Many traders make the error of relating the changes in stochastic to change in price.

Since Stochastic is an oscillator, it has defined boundaries. It moves in a range between the values of 0 and 100. The chart below shows the Stochastic indicator at the bottom of the price chart. Though the boundaries of Stochastic are 0 and 100 it rarely reaches those level.

A level of 80 is considered by traders as an overbought zone and one below 20 is oversold. In these zones the probability of the market moving further in the same direction is limited.

Since Stochastic is a measure of momentum value of 80 means that the momentum is very high. As in the example of vehicle mentioned at the start of the article, it is not possible to turn or stop the vehicle instantly. The vehicle needs to slow down first before it turns. The same logic applies to stock with a very high or very low level of Stochastic.

Some professional traders however, are willing to take a contra-view and take long position when the market enters the overbought and oversold zones.

Taking a trade every time the Stochastic level touches 80 or 20 would be like standing in front of a running truck and expecting a joy ride.

Looking under the hood

Stochastic oscillator is calculated by using the following formula

C is the current close value

H14 is the highest high of the 14 previous trading bars

%K = the Stochastic value as suggested by George Lane

The default value taken by Lane is 14, which corresponds to roughly three weeks of trading. Traders, however, use various numbers from 5 to 20 depending on the requirement and the time period in which they trade.

Since the %K line was found to be too fast Lane introduced a %D line which was a 3 day moving average of the %K line.

In fact, it was further smoothened to produce a slow stochastic by taking another 3-day moving average and the %D value. Lane himself used the %D divergence to suggest a change in trend.

We shall now look at some of the trading strategies using around. A caveat is necessary here. Stochastic gives best results when used along with another technical indicator or price action or chart pattern. On its own Stochastic gives a number of false signal.

Though oversold and overbought signals have been proved to be not as useful, traders still use it but tweak the time frame to a longer timeframe.

The longer timeframe helps reduce the number of trades that a conventional stochastic reading would have given.

As is the case with oscillators, they generally work very well in a flat market. The chart below shows how the price reacted to Stochastic value when the market was in a range. But the moment it started moving in a trend the indicator started giving wrong signals.

Oversold signal: Here a long trade can be taken when the Stochastic level is below 20 but has just started moving higher, as seen in the chart below. A trade can be initiated when the %K line is cutting above 20.

Overbought signal: A short trade can be taken when the %K line is trading in an overbought zone and has just started falling below the 80 level.

As Lane himself used Stochastic to spot divergence between its value and price of the underlying many traders have been using it for the same purpose.

The chart below shows the divergence in Stochastic where it has made a higher bottom but the price continued to fall. In the second instance, the divergence was even starker where the price kept on rising at a fast pace but the stochastic showed a divergence resulting in a change in trend after a few days.

Many traders have developed their own strategies using Stochastic as a standalone indicator or in combination with others.

Among the most common is using the stochastic in a trending environment, here the indicator is used to enter when momentum is picking up unlike earlier when entries are taken when momentum is slowing down.

In an upward trending market it is less likely that the stochastic will come down to an oversold level. In such a case traders modify the stochastic levels for entering the trade.

Here we have moved the overbought level to 70 and oversold to 30. A 20 period moving average is used to identify the trend and trades will be taken only in the direction of the trend.

Other strategies include using Stochastic with candlestick patterns and moving averages. Some traders use the overbought reading of the Stochastic to buy into the stock. Their logic is that if the stock is strong there is still some steam left which they want to capitalise on.

Also, many traders play around with the Stochastic parameters. Some trading software use the 14 value of %K and 3 for %D, while others use values of 5 and 3 respectively. The smoothening value is mostly 3, but even that can be changed.

Stochastic is a very versatile indicator. It can be used in its conventional form to identify overbought and oversold zone or used to take momentum trades. Stochastic is a preferred indicator to be combined with other indicators for confirmation.