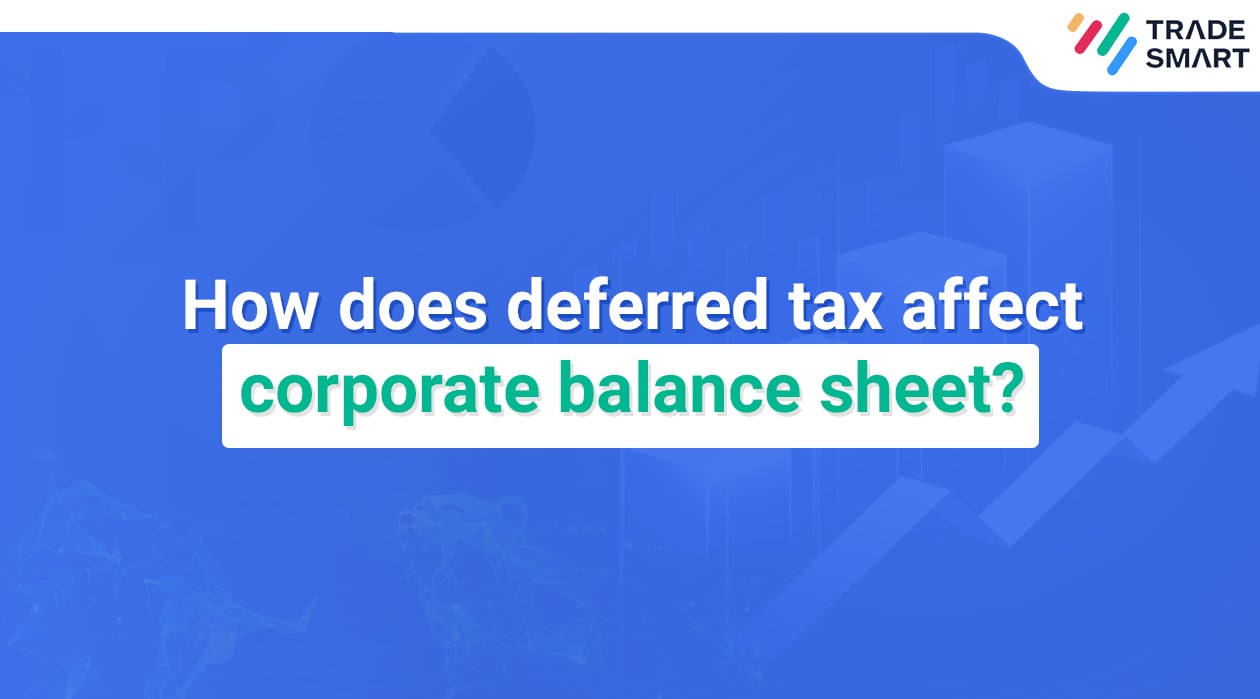 To understand the deferred tax, it needs to be noted that there are two separate financial reports that the organisation prepares every financial year at the outset in terms of accounting policies followed by companies.

Those two reports are:

Balance sheet and income statement as per the provisions of income tax.

The main motive for the creation of two different reports is the difference in the reporting requirements under the companies act and the income tax act.

In other words, as the company follows different reporting provisions for preparing financial statements as per the companies act and the income tax act, there are chances of difference. These differences lead to differences in tax. The methodology to inspect such differences and how to account for the taxation of such differences can only be understood by grasping the deferred tax meaning with clarity.

So, without any further ado, let us dive right in.

What is deferred tax?

Let us start with the generic definition of deferred tax by understanding it with the help of examples.

The tax effect of scheduling variations is known as deferred tax.

–        A machine Costs Rs. 100 for tax purposes, depreciation of Rs. 30 has already been deducted in the current and prior periods. The remaining cost will be deductible in future periods, either as depreciation or through a deduction on disposal. In this case, the tax base of the machine is Rs. 70.

–        Trade receivables have a carrying value of Rs. 100. The related revenue has already been included in taxable profit. The tax base of the trade receivable is Rs. 100.

Thus, there are chances that there exists a difference between the book value and the carrying value as per the income tax act.

Deferred tax refers to an asset or liability entry in a company’s balance sheet which is either due or paid in excess due to temporary differences as per accounting and tax value. If an organisation has paid advance taxes or received a tax credit that can be used in the future, it will fall under assets.

Similarly, when an organisation is liable to pay additional taxes in the future, it will be considered a liability. Every business prepares two different financial reports for each financial year, i.e. an income statement and a tax statement.

Deferred tax arises when there is a gap between the two due to differences in guidelines regarding the preparation of both these statements.

Deferred tax arises from timing differences, which cause tax obligations to accumulate and become due in different years. The differences between book tax and actual income tax lead to the creation of a deferred tax liability or asset.

Numerous transactions can result in temporary differences between pre-tax book income and taxable income, resulting in deferred tax assets or liabilities. Deferred tax liability or deferred tax asset is an important part of the year-end financial closure because it affects the company’s tax outflow.

A deferred tax asset is created in the case of a company when the tax amount has been carried forward due to a discrepancy in an organisation’s income statement. Because of this, its corresponding tax statement has not been recognised in the company’s books of accounts and is recorded as deferred tax assets.

It also occurs when the company has paid additional tax to the department. Deferred tax assets are recorded as an asset on the balance sheet and offset the company’s future tax liabilities.

It is created due to timing differences between the company’s book profits and taxable profits. In cases when a company pays its tax liability in advance or for another period or is conducting its tax liability for a subsequent period in a particular, fiscal year.

Deferred tax liability is a tax disclosed in the balance sheet that is due in the current period but has yet to be paid. The liability is postponed due to a timing difference between when the tax was accrued and when it is due to be paid.

When there is a difference in numbers between an organisation’s income statement and tax statement, it requires that tax be accumulated in a specific year. Eventually, the company becomes liable to settle it in a subsequent fiscal year. This means that the tax will become due in the future.

If a business must pay tax on a financial transaction that has not yet been completed, the tax is deferred until the transaction is completed.

What is the Timing difference?

The company calculates its taxable profit based on provisions as stated in the Income Tax Act and gets its book profits from financial statements prepared in respect of compliance with the Companies Act’s standards.

Because of the differences in tax accounting between financial statements and tax returns, there are permanent and temporary variances in tax expenses on the income statement.

The timing difference is the difference between the book and taxable income or expense, and it can be either of the following:

Differences between pre-tax book income and taxable income that will eventually reverse or be eliminated are known as temporary differences.

Transactions resulting in transitory differences are recorded in financial and tax accounting at different periods. Rent income is one example of a timing difference.

The permanent difference is the difference between book and tax income that are unable to be reversed in a subsequent time.

In other words, the difference between tax expense and tax payable is caused by an item that does not reverse over time.

A company incurring a fine is an example of a permanent distinction.

Deferred tax is recorded in an organisation’s books if chances of reduced or increased tax liability in the future are more likely to occur than not.

There are different occasions when Deferred Tax asset or liability is recorded in the books of accounts:

Deferred tax is created when there is a difference between the depreciation calculated as per the Companies Act ’13 and the provisions prescribed in the Income-tax Act, 1961.

This can be understood better with an example:

The cost of machinery is Rs. 1,00,000. The estimated life of the machinery is five years as per the Companies Act.

The depreciation shall be 20,000 for each year as per the Companies Act and 25,000 as per Income Tax Rules.

Since depreciation is higher as per IT rules, the tax liability for that year will be less. But the depreciation will be adjusted for subsequent years, eliminating any difference between the two depreciation figures by the end of 5 years.

This difference creates a future liability for the company, thereby creating a deferred tax liability.

If there is a difference in the rate of depreciation as per the Companies Act and as per the IT rules, such a situation leads to the creation of a Deferred tax Asset or Deferred tax Liability.

For instance, If a company has assets worth Rs. 1,00,000 on which depreciation is calculated at 10%, whereas the rate is 15% as per Income tax rules.

When an entity realises a loss for a financial year, it allows the entity to carry forward such loss and set it off with any subsequent profits.

Thus, allowing it to reduce the tax liability for subsequent periods. This leads to the creation of deferred tax assets.

How to calculate deferred tax?

Deferred tax is the difference between the gross profit of the Income statement and the tax statement.  It can be calculated as:

This will create a deferred tax liability of Rs. 1500.

What is the accounting treatment for deferred tax?

The accounting treatment for deferred tax is quite simple; we need to recognise the deferred tax asset or liability in the balance sheet through the statement of profit and loss.

Let us understand the accounting treatments by an example:

Suppose a company has computed a Deferred tax asset of Rs. 50, then accounting entries will be;

And, if the company has computed a Deferred tax liability of Rs. 50, then accounting entries will be;

It should be noted that both the deferred tax asset and deferred tax liability are created due to the temporary difference between the book carrying value and the tax base.

These temporary differences are temporary.  Thus, the impact of such differences is eliminated over some time. Ind As 12, “Income taxes”, amounts of deferred tax asset or deferred tax liability are not required to be discounted to their present value.

While doing deferred tax calculation, the time value of money is ignored and thus, the timing difference gets reversed.

Let us understand the above accounting with the help of a complex example:

HIMATSINGKA CO. Private Limited posted a profit of Rs 7500 including the provision for bad debts amounting to Rs. 200.

For income tax, bad debts are allowed in the year when it is written off.

The deferred tax asset differs from deferred tax liabilities on several factors. To ease the understanding of such factors, here is an all-encompassing comparison chart provided for the same.

The company may owe or have a balance with the tax authority which arises due to the reporting differences. Deferred tax is an important balance sheet item that helps investors to gain knowledge about the tax position of the company.

Deferred tax represents the negative or positive tax balances of the Company.

What are the distinctions between temporary and permanent differences?

Temporary differences are those that occur in one period and can be reversed in subsequent years.

Examples of temporary timing differences are Depreciation on fixed assets, bonuses, and so on.

On the other hand, changes that occur at one time and are irreversible in later years are referred to as permanent differences. For example, any tax-free income.

When is it appropriate to recognise a deferred tax asset or liability?

Is it possible to have deferred tax assets and liabilities at the same time?

Both indicate the negative and positive amounts of tax owing and will appear as entries on a balance sheet.

How should deferred tax assets be shown on the balance sheet?

In the balance sheet, deferred tax assets are classified as non-current assets. They are represented under the head of assets.