Shares and Debentures – Are They the Same? 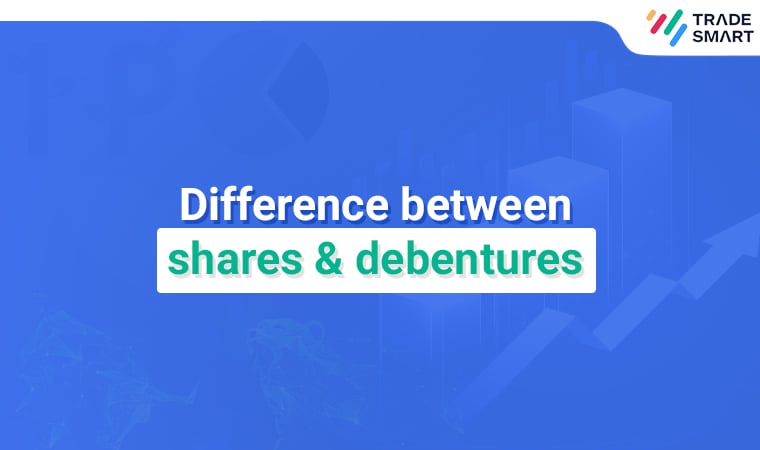 If you’ve decided to invest in the stock market and want to increase your wealth then it’s important that you should understand the definitions and differences between the securities that are available to invest in. There are various types of securities like shares, bonds, mutual funds, debentures and currencies and in this particular blog, we’ll focus on shares and debentures. And to hold such securities with you, it is understood that you should have a demat account to conduct trades in the stock market.

Any company or business needs capital to run its operations. For the more established companies, the two most common methods of raising capital is through equity and debt. To raise money through equity, the company issues shares to investors in lieu of the funds invested. To raise debt from the public, the company releases debentures which is like taking a debt from the public and paying a fixed interest on it.

Though both are methods of raising capital, they are very different from each other. What are the differences? Let’s have a look.

Shares are tiny ownerships issued by the companies for the money invested by investors. As an owner, you are holding a part of the company’s equity. Each of these shares gives the holder certain rights and privileges. As a shareholder, you are entitled to receive dividends which are given out by the company at regular intervals. There are two types of shares – preference shares and equity shares.

The price of purchasing these shares vary depending on the market demand and supply and various other factors like company performance, macroeconomic conditions, industrial performance etc.

So, debentures are debt instruments sold by the company to creditors to raise debt capital for its projects.

Like shares, even debentures are categorised into the following types

Do note that many times debentures are often mistaken for bonds and are used interchangeably very often but are not the same.

What is the difference between shares and debentures?

The difference between shares and debentures are as follows:

Shares offer a part ownership of the company. You may or may not get voting rights. In case the company profits, you will get dividends. As for debentures, if you buy you would be a creditor to the company.

In the former case, they get a share of the profit when you release the surplus profit. This is called dividends. In the latter case, you pay them a fixed or floating interest.

The income through debentures is fixed since it is interest on the invested money. No matter whether the company is in profit or loss, the interest is to be paid. So, your income would be assured. Thus, there’s less risk with debentures, but usually the income is much lower.

In case of shares, the company pays its shareholders dividends. That is if there is surplus profit. The purpose of paying dividends is to boost the confidence of the shareholders and that the returns could be very high, but so is the risk. The returns aren’t fixed.

If you want to play safe, go for debentures. If you prefer high-risk high-return dynamics, then go for shares.

Shares offer almost no security. There could be profit or loss. While past data and company reputation could be used for prediction, mostly, shares are a high-risk asset. Even the dividends offered by the company are as per their own accord. One thing you will retain is the ownership of the tiny portion of the company.

Would a bank give you a loan if your credit history and CIBIL score isn’t strong? Same is the case with debentures. Most investors will prefer to invest in debentures released by high rated companies. One of the reasons is that debentures are mostly unsecured. If the debenture is unsecured, your money is at risk. The debentures of reputed companies sell like hot cakes as chances of paying back the money is good, whereas those of less reputed companies don’t find many takers.

In case of shares, investors prefer to rely on graphs, prediction, history, etc and not just the overall reputation. The loan repayment history is rarely checked as far as the company’s profile looks strong.

In case of debentures, you get no voting right. You are simply a person who lent a loan to the company and got an interest for it. Period!

The difference can be summarised in the table given below.

Shares or Debentures – The better investment?

While planning investment, the wise thing to do is to secure your money first. Then raise capital, and then risk your money. Unlike fixed deposits, debentures offer a much higher level of interest. Unless you have significant capital to risk, debentures should be the choice of investment.

If you have significant capital, have secured your money, and are interested in growing your money much faster, then shares are the thing for you. However, make sure to follow discipline while investing in shares. Sometimes a small win can tempt you into huge losses.

While both instruments have their pros and cons, it is up to you to decide where you want to put your money depending on your risk tolerance.

1. Why do companies issue shares and debentures?

The main purpose of a company issuing shares and debentures is to raise money from the public to grow its business and operations and expand further.

2. Are there any rules while issuing debentures?

When a company issues debentures, the debenture holders do not get any voting rights but the company has to create a Debenture Redemption Reserve (DRR) out of the profits of the company and the amount that is credited to such an account shall not be utilised for anything else except for the redemption of debentures.

3. Can shares be converted into debentures or vice versa?

4. Can shares and debentures be issued at a discount?

Shares can only be issued depending on the demand and supply and other factors in the market but debentures can be issued at a discount to the lenders.

5. How are debentures traded?