How to Use Pivot Point in Intraday Trading 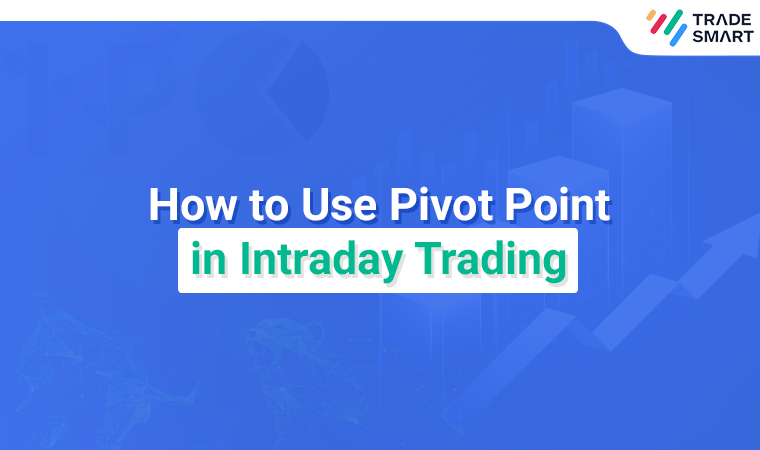 Traders mostly use it to analyze multiple stocks with their opening and closing value to predict their movement. This is done with the help of resistance value and support value (basically the highest and the lowest the stock touches during the trading session). It can help determine the entry and exit position in the trade during different time frames and lower the risk of loss.

The benefits of trading in Pivot points are as follows:

A pivot point is a technical analysis indicator or set of computations used to determine the market’s overall trend. The pivot point is just the average of the preceding day’s high and low and closing price. Trading above the pivot point is considered bullish, while below is deemed to be bearish.

There are four main ways to calculate for pivot points:

Pivot points are used to identify the overall trend of the share – where the range above the point is considered an uptrend, while in the opposite, a range below the pivot point is viewed as a downtrend. It is not entirely accurate, but the result is very close to reality with the value of support and resistance.

Candlestick pivot point strategy: Pivot points are most effective on candlestick charts as they give the best idea on the candles, which determine the bullish and bearish trend with their patterns. One can have a better idea of the nature of the trade after using this method.

Day Trading Using Pivot Points: Intraday trading is the type of stock trading where you buy and sell the stock on the same day before the trading session ends. It is a risky yet fast and profitable option due to the fluctuation in the share price. Hence, it is the most popular option with traders. There are many ways to determine the approximate position of the share, but the most preferred method is pivot tables and pivot points to make accurate trading decisions.

The pivot points are divided into seven categories to determine the stock:

And the pivot point in the centre is the main point.

Pivot points are determined by the OHLC (Open, High, Low, and Closing) of a stock price from the previous day.

Where the calculation of Pivot point is – (High+Low+Close)/3

1) Pivot level breakout: Pivot level breakout uses a stop limit (a price pre-set to mitigate the risk of loss) and then trades when the stock price is above the pivot point. If the trend is bullish, one should hold the position for the whole day, but if the trend is bearish, one should hold onto the position for the short trade. The best time to use this trend is in the morning, where the chances of loss are less, and the breakouts are more.

If the market price rises to higher highs, entry orders placed above resistance will be ready to buy. Orders to sell below the S4 line of support, on the other hand, will be activated if the market moves to lower lows. Traders who want more confirmation should wait for a candle to close before triggering a market order. The idea is to enter the market when there is a new price spike, which usually coincides with economic news.

It works on the principle of reversal, which means that when a price reaches a pivot point for the first time in each direction, it reverses the trend.

How to Trade Pivot Point Bounce?

The following are the steps to understand how traders can trade with the help of the pivot point bounce strategy.

Step 1: Choose a stock and add the daily pivot points, and open the OHLC (Open, High, Low, and Close) bar chart for that.

Step 2: Follow the pattern and keep a tab when your stock price reaches the Pivot Point Zone.

Step 3: Wait until the price closes below or above the Pivot Point Zone.

Your doubts will be dispelled by the explanation that follows.

What is a Stop Loss?

This trading strategy can put a stop-loss at the pivot point or the entry bar’s high/low. Though it depends on the market, you are trading in. A trader must use no specific orders for this trading strategy, though a limit order is preferred to protect traders from risk.

When to Exit the Trade?

The trade automatically fills once you meet your desired trading price or hit the stop loss.

As per the market you are trading in, you can adjust the target to the next pivot point or change the stop loss to suit your trading limits.

Pivot points are an excellent tool for identifying support and resistance areas, but they are most effective when combined with other types of technical analysis.

Pivot points are based on a simple calculation, and while they may be helpful for some traders, they may not be for others. There is no guarantee that the price will stop, reverse, or even reach the levels drawn on the chart. At times, the price will bounce back and forth between levels.