What is Supertrend Indicator? – Its Formula & How to Use 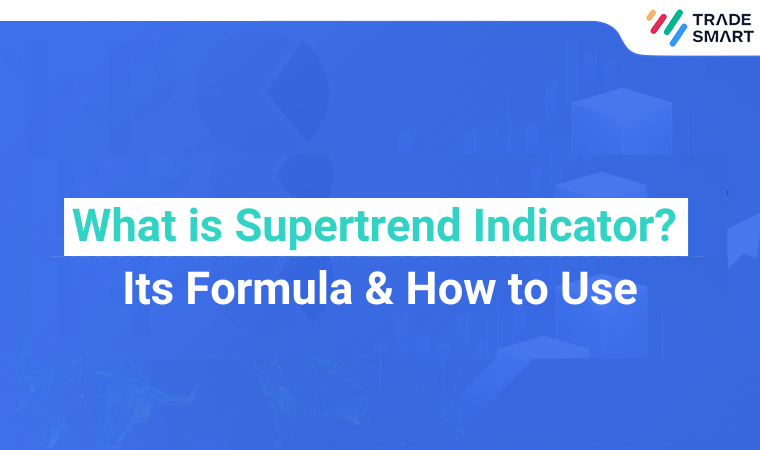 They are equally comfortable about going long or short on a trade. Essentially, they are buying low and selling high if they are taking a long trade or selling high and buying low in a short trade.

While it may sound simple, the first problem for a novice retail trader is to deduce the direction of the trend. One simple trend following indicator that is increasingly being used is the Supertrend Indicator. The name of the indicator may sound like overkill, but it does determine the trend of the underlying.

The Supertrend indicator uses average true range (ATR) for its construction. To understand Supertrend better, we would need to learn more about ATR.

As the name suggests, ATR is the Average of True Range, which in turn is the difference between the highest price and lowest price in a particular time span.

ATR will be the average of the true range over a given period.

The default value of ATR for the calculation of a Supertrend in most software is 10, so the average value of 10 bars is used.

Armed with this information, now let’s have a closer look at Supertrend.

What is a Supertrend?

Supertrend consists of one line that crisscrosses the price as shown in the chart below. 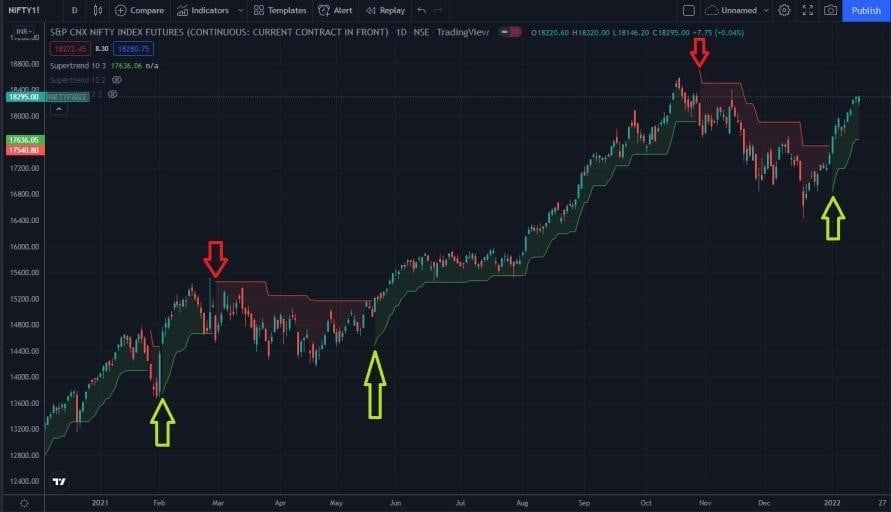 A simplistic way of looking at it is, if the Supertrend is green, the trend is up and if it is red, then the trend is down.

For calculating the Supertrend apart from ATR, we also need a multiplier. The default value of the multiplier is 3.

For Supertrend Upperline (when the trend is bearish or line is Red):

The simplistic nature of the indicator has made it very popular among traders.

How to use the Supertrend indicator

As seen in the chart above, a very simple strategy is to buy when the price crosses above the Supertrend indicator and sell when it goes below the indicator. Though it looks simple on the Nifty chart above, we are looking at a period when the price was trending. In a flat market, the strategy would have given big losses which would have eaten away most of the profits.

It is always better to use an additional confirmation for taking the trade. One can use any other trend following indicator as RSI, MACD, Stochastics, or moving average for confirmation.

The chart below shows a combination of a Supertrend with a 200 period exponential moving average on a 1 hour Nifty chart. 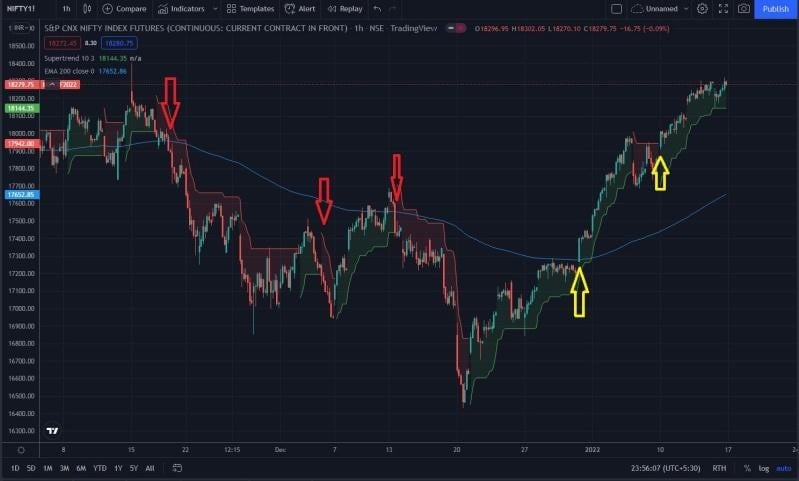 Trades can be taken only if the price is either above both the indicators or below both of them as marked on the chart.

The additional filter helps screen out trades which would have given big losses. There will be losses even using this filter as no trading system is perfect, but the losses will be small and manageable.

Another popular way of using the Supertrend indicator is using more than one Supertrend by changing the ATR and multiplier values. Trades can be taken only when the price is clearly above the three Supertrends or below it.

One can experiment with various values of Supertrends based on their risk profiles. Too wide values of ATR or multiplier will result in most of the time the price being between the three Supertrends while too close a value would yield more or less the same result as a single Supertrend. 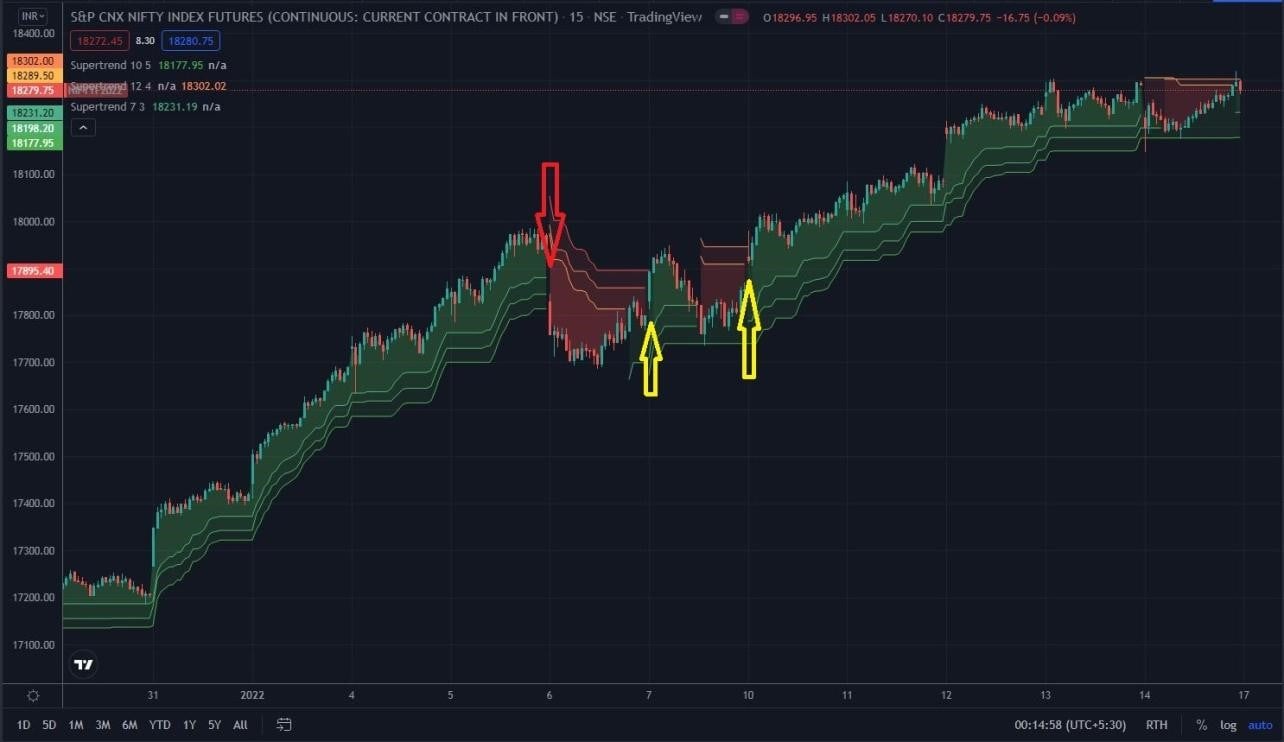 For the sake of explanation we have taken the values of 10,5; 12,4 and 7,3 for the Supertrends. Entries are to be taken only when the price is either above all three Supertrend or is below all of them.

There are many Supertrend trading strategies that are used by traders. The simplicity of the indicator has made it popular among the trading community.

Advantages of the Supertrend Indicator

Disadvantages of the Supertrend Indicator

Supertrend indicator is a powerful indicator that works very well in a trending market. Its simplicity in generating buy and sell signals and a visually identifiable stop loss level has increased its popularity among traders.

However, like most trend following indicators, it does not work in a flat market.

What is a Supertrend Indicator?

A Supertrend indicator is an indicator that tells us the direction of the trend. It uses average true range (ATR) for its construction.

What is an ATR?

ATR is the acronym for Average of True Range. True range is the difference between the highest price and lowest price in a particular time span. ATR will be the average of the true range over a given period.

What does Supertrend Indicator indicate?

What are the various Supertrend strategies?

Since Supertrend is a trend indicator, most strategies that are used in normal trend following systems are used with this indicator.

A simple Supertrend crossover strategy is common, but traders have added more filters to it in order to reduce the whipsaws that such a strategy generates. Only those trades are taken which are in the direction of the bigger trend.

Traders also use more than one Supertrend Indicator with different parameters and enter a trade when the price is clearly above all the Supertrends.