How does EBITDA affect your investing decisions? 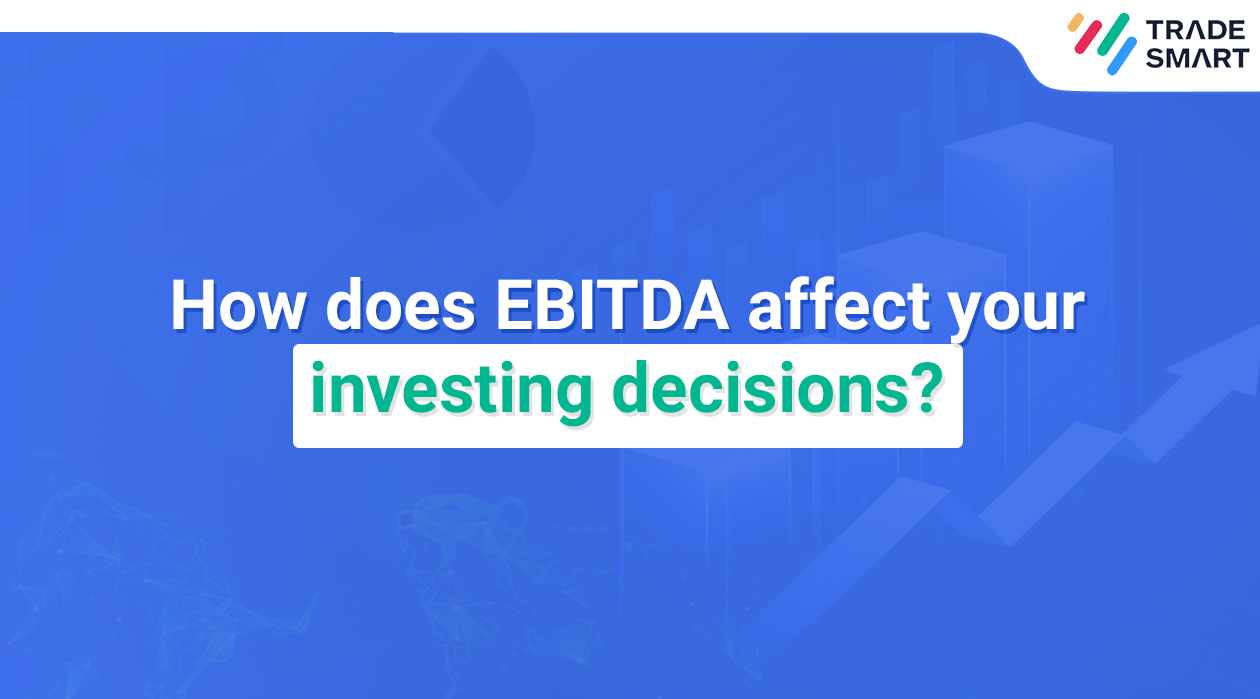 Normally, investors focus on cash flow, net income and earnings as the primary measures of a company’s health and value. But over the years, another measure has crept into quarterly reports and accounts: earnings before interest, taxes, depreciation and amortisation (EBITDA).

While investors can use EBITDA to analyse and compare profitability across companies and industries, they should understand that there are serious limits to what the metric can tell them about a company. Here we look at why this measure has become so popular and why it should be used with caution in many cases.

EBITDA, or earnings before interest, taxes, depreciation and amortisation, is a measure of a company’s overall financial performance and is used as an alternative to the net income in certain circumstances.

However, EBITDA can be misleading because it does not reflect the cost of capital investments such as property, plant and equipment. It doesn’t include the interest costs on borrowed capital either.

EBITDA as a financial metric

By adding back interest expenditure and taxes to earnings, this statistic also removes debt-related expenses. Nonetheless, because it can reflect earnings before accounting and financial deductions, it is a more precise indicator of business performance. Simply put, EBITDA is a profitability metric.

While there is no legal necessity for corporations to publish their EBITDA, it can be calculated and reported using information from their financial statements, according to the US generally accepted accounting principles (GAAP).

What is the EBITDA coverage Ratio?

The EBITDA-to-interest coverage ratio is a financial solvency ratio used to evaluate a company’s financial stability by determining whether it is profitable enough to pay off its interest-oriented expenses with pre-tax income. It examines what percentage of earnings before interest, taxes, depreciation, and amortisation (EBITDA) can be used for this purpose.

In general, such a ratio can be used to assess the solvency of companies with high leverage. The idea behind this ratio is that a company should earn enough money to keep a profitable cash surplus along with meeting its debt obligations.

The EBITDA Coverage Ratio formula is as follows:

As is customary, EBITDA stands for earnings before interest, taxes, depreciation, and amortisation. In this case, where the loan payment includes both interest and principal payments, and the lease payment figure is the minimum lease payout.

What is EBITDA Margin?

The EBITDA margin is a measure of a company’s operating profit as a percentage of its revenue. Judging by the EBITDA margin, analysts and investors can compare the performance of companies operating in the same sector, regardless of their size.

The EBITDA margin is simple to calculate. Divide the entire earnings before interest, taxes, depreciation, and amortisation by the total revenue of the firm. It is expressed as a proportion of total income.

It is calculated as EBITDA Margin =  EBITDA/Revenue.

The earnings are calculated by taking sales revenue and reducing operating expenses, such as the Cost of goods sold (COGS), selling, general, and administrative overhead expenses, but excluding Depreciation and Amortisation.

The margin does not include the impact of the company’s capital structure, non-cash expenses, and income taxes. But it is considered to be a good indicator of an organisation’s financial health because it believes in an organisation’s performance without taking its financial decisions, accounting decisions, or various tax environments into consideration.

EBITDA may be used to compare two firms that are in the same industry but have differing market capitalisations. Take a look at the example in the table below to see how a comparison may be made:

We can observe from the above that Company XYZ has a greater EBITDA than Company ABC even though the former’s revenues are lower than the latter.

It indicates that Company XYZ is better managed and has a more cost-effective strategy than Company ABC. A larger EBITDA margin suggests a corporation that is financially secure and less risky.

What does a “GOOD EBITDA” mean?

The definition of a “good” margin varies by industry or business; also, a 60% margin in most industries would be a good sign. However, it is normally a greater percentage, preferable because it indicates that the firm can easily cover its operational expenditures. To get at a “good” margin, one must calculate and compare the margins over many periods.

There are several advantages of EBITDA margin, and they are as follows:

The EBITDA margin is a metric that evaluates a company’s annual cash profitability. For investors, looking at the company’s EBITDA margin might be a better signal than looking at other profit margins since it takes into account non-operating or other specific depreciation, amortisation, and tax variables helping companies in cost reduction ventures. A robust and efficient cash flow with low operational expenditures is indicated by a high EBITDA.

It makes it simpler to compare firms across industries because EBITDA is usually expressed as a percentage of total sales by utilising the operating profit helping investors and analysts to understand how well a company is managing its operational cash relative to the revenue it generates.

Furthermore, an EBITDA margin is very useful for owners to examine how well the firm is managing its resources and operating cash since it shows the relationship between operating cash flow and sales.

There is also a flip side to EBITDA margin. The disadvantages of EBITDA are as follows:

The EBITDA margin should not be used to evaluate companies with high debt levels evaluating a company’s success; excluding debt has several disadvantages, as large interest payments should be factored into a company’s financial analysis.

It does not take into account the impact of debt; therefore, firms with a lot of debt have a greater present (earnings before interest, taxes, and depreciation and amortisation) margin.

EBITDA margins are often larger than net profit margins as EBITDA is earnings before deducting the Interest, Tax, depreciation and amortisation. While net profit is the amount of earnings after deducting such expenses. Companies with low profitability will emphasise EBITDA margin as a metric for success.

What are the advantages and disadvantages of EBITDA?

EBITDA has its own share of merits and demerits. It is important to look at both sides of the coin before fixating on it for your investment decisions.

The advantages of EBITDA are as follows:

The disadvantages of EBITDA are as follows:

How does EBITDA Work With Leveraged Buyouts?

Leveraged buyout investors use EBITDA to quickly calculate whether companies could pay back the interest on these financed deals.

Leveraged investors promote EBITDA as a tool to determine whether a company is able to pay off its debt in the short term. These investors argued that looking at the EBITDA to interest coverage ratio would give investors an idea of ​​whether the company is able to meet the higher interest payments it will face after the restructuring. For example, investors might argue that a company with an EBITDA of Rs. 50 Lakh and interest charges of Rs. 2.5 lakh had an interest coverage ratio of 2, which is more than enough to pay off debt.

EBITDA vs EBT and EBIT

(EBITDA) is an acronym for Earnings Before Interest, Taxes, Depreciation, and Amortisation.

The sole difference between EBIT and EBITDA is the inclusion of Depreciation and Amortisation.

Earnings before tax (EBT) shows the amount of an operational profit achieved before taxes, whereas EBIT eliminates both taxes and interest payments.

EBT is computed by taking net income and subtracting taxes to get a company’s profit payments and represents how much of an operating profit has been earned before accounting for taxes.

EBIT reflects earnings (or net income/profit, which are the same thing) after interest and taxes have been deducted.

EBIT is a metric that is used to evaluate a company’s basic activities without taking into account tax charges or capital structure costs.

The financial measures of EBITDA and adjusted EBITDA are frequently used to assess a company’s profitability.

The formula for calculating EBITDA & adjusted EBITDA is as follows:

How is EBITDA different from Net profit?

The key differences between EBITDA and Net Profit are listed below in the form of an all-encompassing chart.

In short, before investing in the stocks of a company, one needs to know to be able to calculate key performance metrics such as EBITDA, EBITDA multiple, and EBITDA revised.

These financial performance metrics provide a simple but accurate picture of the company’s efficiency in generating an operating profit and managing high-interest charges on its debts in the short term.

But, while EBITDA is used, investors are also warned not to rely too much on it. It can sometimes be misleading, and companies that do not have a strong profit to do the project use EBITDA to disclose their actual financial performance.

Thus, understanding EBITDA and its components to be able to use it in decision making.

What Is the Importance of EBITDA?

EBITDA informs investors about a company's operational efficiency and how much of its earnings may be attributable to operations.

What distinguishes the EBITDA margin from other profit margins?

The generally accepted accounting principles (GAAP) are required for all company accounting and are a standard in corporate accounting.

What Does a Drop in EBITDA Indicate?

There are numerous reasons why a company's EBITDA may fall. However, in general, a drop in EBITDA can signal cash flow issues and low profitability.

What is the distinction between EBITDA and net margin?

The net margin is defined as the ratio of net profit to total sales, in this other income, interest expenditure, depreciation, amortisation, and taxes are also included. Net margin gives a more accurate assessment of enterprises with significant debt in comparison to EBITDA margin.

What is meant by the term negative EBITDA Margin?

A negative EBITDA indicates that you have a shortage of money even after depreciation and amortisation. Negative EBITDA is the same as negative operating income in this scenario.