IPO vs FPO – Difference Between IPO and FPO 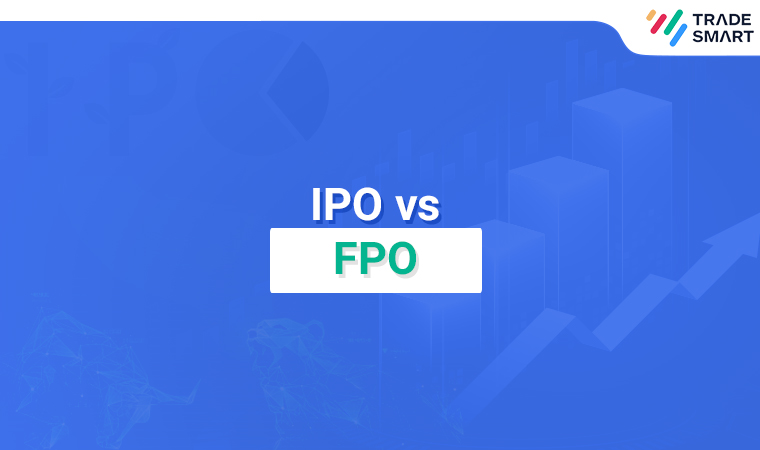 There are various ways in which a public listed company can raise money from the equity market. Among them are IPO (Initial Public Offering), Rights issue, placements of shares like the Qualified Institutional Placement (QIP), or the Follow-on Public Offer (FPO).

In this article we shall look at two ways in which a company can raise funds from the general public – that is the IPO and FPO.

IPO is a process by which a public limited company approaches the general public for funds and widens its shareholder base by getting listed.

After following multiple steps and guidelines issued by the market regulator SEBI, a company is ready to raise funds from the public.

The fundraising process is considered complete only if the issue receives the minimum required subscription. In case of an oversubscription, the shares are allotted using various mechanisms as laid out by SEBI.

After the shares are credited to the Demat account of the subscriber, he or she can trade the share in the stock exchanges.

Different type of IPO is defined by the way the pricing of the issue is done. There are two ways in which funds can be raised through an IPO – fixed price-issue and book-building issue.

An FPO or a Follow-on public offer is the second route through which a company can raise money from the public. The major difference is that the company raising money is already listed. The company goes through a similar but less stringent process of certification by the market regulator as does a company approaching the market for an IPO before they are granted permission to raise money.

There are two types of FPOs i.e. Dilutive FPO and Non-dilutive FPO.

Differences between IPO and FPO:

The differences between IPO and FPO can be outlined along several parameters:

Listing statuus: IPOs are required for raising capital by issuing new shares to the general public to meet the various needs of the business which may include inorganic growth, debt reduction, or growth capital.

In FPOs shares are issued to raise capital for more or less the same as in the case of an IPO. The main difference is that the company issuing FPO is already a listed entity.

Risk: In the case of IPOs the public history of the company is missing and it is difficult to judge the management’s capability. The risk involved in an IPO is higher.

In the case of FPOs, the company has some public history and would have been covered in media and research analysts. The fear of the unknown in not present in FPOs.

Pricing: Pricing in the case of an IPO is determined on the feedback given by the merchant banker to the company. What can the market absorb is the yardstick of fixing the price.

Pricing of an FPO is more transparent as it is determined by a fixed formula prescribed by SEBI.

Now that you know something about IPO and FPO, you should also know that if you want to invest in them then you should have a demat and trading account as well. In today’s age, opening a demat account is as simple as  opening a bank account. You can have a look at the details here.

1. Which is more profitable-IPO or FPO?

IPO gives higher returns to investors and is more profitable than FPOs because through IPOs investors are vested in the initial growth and expansion of the company.

2. What are the primary objectives of IPO and FPO?

The primary objective of an IPO is to raise funds from the general public to expand the business. Whereas FPOs are supposed to bring in subsequent investment and additional capital meant for financing projects.

3. What are dilutive and non-dilutive FPOs?

In dilutive FPOs remains constant whereas in non-dilutive FPOs the price of shares is determined by the market.

4. What does a non-dilutive FPO mean?

Non-dilutive FPO means the bigger shareholders of the company sell their shares to raise more capital. This may not increase the number of shares of the company but makes more shares available to the public.