NSDL vs CDSL – The Showdown 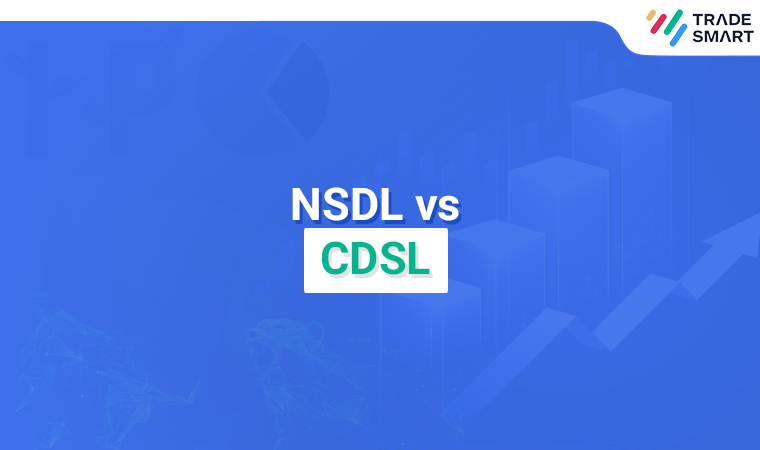 If you’ve already opened a demat account or invested in mutual funds then at some point at the end of every month, you would receive an email with the terms “NSDL” or “CDSL” mentioned in the subject line or in the body which shows a summary of your holdings in the stock market.

And while the NSDL and CDSL might share the same function of storing securities in dematerialized form, they are different from each other. And what’s the difference? Let’s find out.

How do Depositories work?

Stock trading is a great way to invest in the markets, but if you want to trade in a stock market, you need a demat account first. A Demat account is a depository account that stores stocks and shares, letting you buy and sell them whenever you want. So, what’s the relationship between your Demat account and these depositories? Well, when you buy shares online, they’re held in a Demat account, which is just an intermediary. The real holders of your shares are CDSL and NSDL.

The two depositories are the same as banks in the sense that you have an account for cash and one for fixed deposits. Individual investors can put their cash in a savings account with a bank, which is the same as holding shares with the depositories.

Another task that depositories perform is the distribution of dividends to shareholders. Companies need to know who their shareholders are and depositories come in handy for keeping track. Previously, when you sold or bought shares from someone else, it was a much more complicated process. You would have to transfer the share certificates to the other account. Now, thanks to dematerialization, it is just an account transfer of your shares between two Demat accounts.

NSDL is the oldest and largest depository in the country. It was set up in 1996 with the objective of facilitating the fast transfer of securities and was the first depository to start trading services in electronic format. This helped save time that otherwise would have taken had the traditional method of exchanging tangible certificates been followed.

As per the data provided by SEBI, the NDSL has more than ~1.9cr active investors with more than ~30,600 depository participants service centres across 2000 cities in India. It keeps the following securities in dematerialised form

The various services offered by the NDSL can be listed below

The second-largest depository in India was started in Mumbai. The CDSL is promoted by the  Bombay Stock Exchange and has shareholders such as HDFC Bank, Standard Chartered Bank, and Canara Bank. This depository holds securities in two formats: dematerialized (or un-certificated) and certificated.

In the new world of trading, electronic formats are the norm and CDSL’s primary focus is to provide safe, useful, and secure depository services. The company began its operations in 1999 after receiving clearance from the Securities and Exchange Board of India (SEBI). Similar to NSDL, it keeps the following securities in dematerialised form

The various services offered by the CDSL can be listed below

As per the data from SEBI, the CDSL has more than ~2cr active customers and more than ~20,000 depository participant service centres across the country.

How are the CDSL and NSDL different from each other?

Instead of explaining the nuanced differences between the National Securities Depository Limited and the Central Depository Services Private Limited, we’ll just say that they’re very similar. Both offer similar services and work in the same way. Investors can avail themselves of these services through a depository participant.

What are the Services Offered by NSDL and CDSL?

If you compare the NSDL and CDSL, their similarities outweigh their differences. They have different sponsors and different account formats, but no difference in function or strategy. As a consumer, you can use the services of both depositories through a depository participant.

Key services offered by NSDL and CDSL are as follows:

NSDL or CDSL: The better choice?

When it comes to capital market securities, NSDL and CDSL are not any different. Their functioning strategy is the same and they are both governed by SEBI. The only difference between them is their promoters, establishment years, and account numbers.

The choice of which depository to use is a complicated decision. If you observe the above differences then you would notice that there is no material difference between the two or something that stands out which will benefit the trader. And in this case, the trader is not involved at all in the selection of the depositories. There is no answer on which one is better, CDSL or NSDL. A DP can choose either depository and there is no reason given for the decision, nor do they see any better choice in their chosen one. There might be a difference in the charges levied by these depositories but that is mostly between the DP and depository and not the trader.

Now that you’ve gotten all the information about CDSL and NSDL depositories, you can start investing wisely. Choose a trusted stockbroker with cutting-edge trading platforms like TradeSmart for your Demat account and trading account. Look for features like a free online Demat account, no annual maintenance charge, and an excellent customer service team.

Your demat account is only an intermediary between your trading account and depository and the main job for it is to store the securities you buy and sell.

Is TradeSmart a depository?

When does the CDSL and NSDL send statements?

What kind of transactions will be mentioned in the NSDL and CDSL statements?

All the securities that are bought and sold during a particular month will be shown and the latest holdings which includes the number of securities and their value will be shown in the account.