All About ECB Quantitative Easing 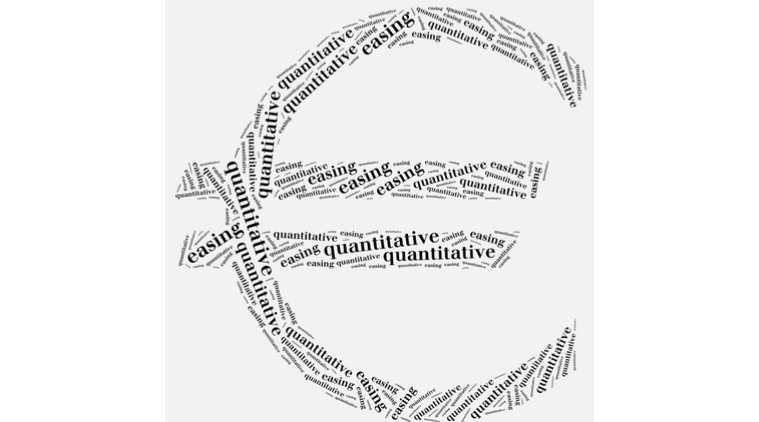 The Quantitative easing program from the ECB is here, will it be sufficient to save the Euro zone?

The world will closely watch the ECB (European Central Bank) monetary policy meet today. There are several things that make this policy meet unique from the usual meets that any central bank convenes.  Firstly, it is the wide spread consensus of a stimulus announcement that the streets have already discounted, on the lines of the statements issued by the ECB president Mario Draghi in the previous policy meets and press conferences. Another unconventional thing this time is the quantum of the stimulus. There is a widespread consensus the ECB can come up with a bond buying program roughly around 600 billion Euros to rescue the sluggish economy and steer inflation near its target.

What ECB quantitative easing is, a share trader should read

Well, the road map does not look that easy for the ECB president, given the reluctance amidst the stronger economies like Germany regarding the stimulus, which strongly believe that this is not a permanent solution to the problems of the Euro zone. The argument states that any stimulus will deviate the extravagant nations from their austerity measures and the reforms which they were planning to undertake in order to revive their economies. Another reason for opposing the bond buying program is the default risk that each member has to share in case of default by any member country whose band are purchased.

Thank fully ECB can refer to the recent bond buying program underwent in the US, UK and Japan that have spooked some momentum in their economies to settle the first issue, however to address the second concern it might be tough ride for ECB which is apparently working on an idea where the default risk is not shared by all the nations, instead by each national bank under the 19 nation Euro system will be held responsible for its own default. This looks impressive at first glance but it defeats the whole purpose of bringing the nations under single currency and can rather question the sustainability of the ECB as well. One needs to wait for few more days to see what path the central bank chooses to walk upon.

Coming to the Euro now, the currency continues to depreciate freely even after witnessing a decline of 12 % against dollar in the year 2014. Any stimulus will further take the breath out of it where it can test fresh lows against the dollar as an immediate knee jerk reaction, however in order to save the Euro zone from the deflationary threats ECB needs to increase the money supply in the system . The recent step by the Swiss bank (SNB) to remove the 4 year old ceiling placed for Swiss franc against Euro points out that the SNB does not want to let go the opportunity of gaining against a currency which is not looking to bottom out immediately. At the same time the decline in the Euro is an opportunity to boost the exports as the weaker currency will make the exporters competitive in the international markets, which in turn can improve the internal business sentiments, labor market conditions and can pave the path for the economic recovery over in a gradual manner.

The success of any stimulus will eventually depend upon the way how the program is designed. It remains to be seen that whether the QE is worked to revive the economy in “whatever it takes” approach to trigger the growth, repeating what the world just saw from the US federal Reserve or the QE is used to in a manner where the ECB creates money to buy bonds from institutions that reinvest the proceeds in asset classes that generate better returns, even outside the zone , in an attempt to further lower the exchange rate, making exports cheaper and imports costly, hence targeting a higher  inflation rate. Will this stimulus be sufficient for a dreaded economy to revive or this is just a beginning. These questions will only be answered in due course of time for now it’s certainly a ray of hope in the dark for the Euro nations.