What does each Navdevi teach us about financial planning?

By Aditya Paleri Trading No Comments 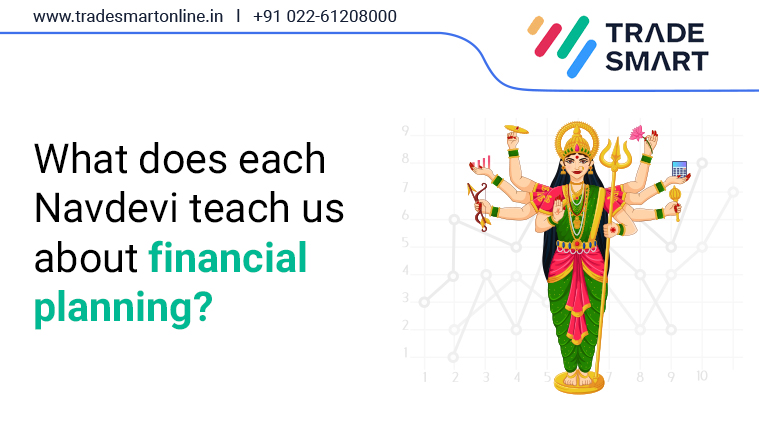 Financial Planning this Navratri: What Each Navdevi Can Teach Us on Finance

The festival season is upon us, and we will begin the celebrations with Navratri from the 6th of October. With Navratri comes a rejuvenating positive force that is much needed after a year of toil.

Each day of Navratri is dedicated to a Navdevi, the nine goddesses who are manifestations of Goddess Durga. Each Navdevi is a symbol of purity, bravery, and strength. However, each Navdevi is also a different stage of Goddess Durga’s evolution, and they all have some valuable financial planning lessons for us.

In this article, we celebrate the spirit of Navratri by embarking on a more prosperous financial and mental journey ahead.

The following are some of the best tips for financial planning:

The first manifestation of Goddess Durga, Maa Shailputri, is the daughter of the king of the Himalayas. A princess herself, she is the first step in the journey towards realizing the fullest form of Durga. In fact, the journey wouldn’t even begin without Maa Shailputri choosing to step outside and leaving behind her comfort. Hence, the perfect inspiration to start your investment portfolio with!

Although it may scare us to begin, even the best struggle with uncertainty and challenges that come as part of any journey, it is, however, the most crucial to start if we are to get anywhere at all.

After one step out, the journey has only begun. On your way, you must learn, acquire knowledge, and practice the knowledge with utmost purity and Genuity at heart; this is what Maa Brahmacharini teaches us.

To be patient and curious, to not ever mind a setback but only to evaluate mistakes, and most importantly, to admit that there is, after all, a long journey ahead is the most important lesson on financial planning from navdevi!

The third form of Maa Durga is also possibly the most versatile one, while also the form in which Lord Shiva married her, and their marriage itself contains a lesson for us investors.

On the day of the ceremony, Lord Shiva came drenched in white ash, and not just that, he also brought with him a convoy of ghosts, werewolves, rakshasas, and more such unconventional guests along. Seeing the grooms’ party, the bride’s family was terrified. Then, Parvati took the shape of Maa Chandraghanta, kind and compassionate towards all those she loves and ruthless and fierce against those who do wrong.

This temperament of hers finally convinced Lord Shiva to transform himself into a handsome dreamy groom.

In this manifestation of Goddess Durga, we find the creator of the universe herself, who did so with just a smile. Not only that, Maa Kushmanda continues to provide life-sustaining forces to our universe while she resides at the core of the burning sun.

For financial guidance-seeking investors, it’s a great inspiration to have a will to create something extraordinary and put all they can in their endeavors.

The mother of Skanda is worshipped on the 5th day of Navratri. Not only is she a fierce warrior herself, but she is also a symbol of love, serenity, and fertility.

To investors, her energy is a relic of a watchful protector who maintains a close eye while also allowing their creativity to grow independently and trusting in their ability.

The symbol of courage, wisdom, bravery, and justice, Maa Katyayini is also the slayer of the demon Mahishasura.

She encourages us to slay all the bad performing assets within one’s portfolio while also judging it objectively and not letting our emotions shadow the truth. Financial planning also involves owning up to one’s errors, rectifying them, and learning from those.

The seventh avatar of Maa Durga is Maa Kaalratri, or Maa Kali, who is a symbol of bravery and strength. However, what most people do not know about this goddess is that she is boldly herself. Unconventional in her attire, dawning a garland of skulls and bones, and presenting a fresh take on goddesses, Maa Kaalratri is herself!

She encourages us to take risks and not dive into other’s versions of what a goddess looks or talks like. She is a force to be reckoned with and blesses her devotees with confidence and safety.

Known to fulfill all the wishes of her devotees, Maa Mahagauri is a symbol of love, manifestation, and wisdom. It is also how Lord Shiva finds her by a river bed, all covered in dirt and blood of her enemies.

Maa Mahagauri’s tale hints at the power of having strong mentors and asking for help. Having a financial advisor’s opinion can help us make better choices

The last manifestation of Lord Durga is the one that grants all knowledge and values to Lord Shiva. Together, they are worshipped as one: Ardhnarishwar.

Learning from her example, we can aspire to begin where we are and not stop until the best version of ourselves is reached, a version so exemplary that even Lord Shiva had to seek her guidance.

If you too need some help, don’t hesitate. Reach out to TradeSmart.

We hope each one of Maa Durga’s manifestations blesses you for a financially and spiritually blessed year. Have a great Navratri!