By Tavaga Advisory Trading No Comments

Welcome to the third edition of our weekly musings.

Global stock markets barring China were under pressure for the week ended 18th September on the backdrop of weak commentary by US Fed Chairman Jerome Powell and the Bank of England. The Fed as well as the Bank of England believed that the economic outlook remains uncertain in the near future as the pandemic and the containment measures following the outburst of the coronavirus have impacted the global economy badly.

In the 2nd volume of weekly musings published last week, we discussed the trends in high-frequency indicators, such as the electricity consumption, road traffic on the based on Google Mobility Index and FASTag transactions, and the consumption of petroleum products. While there was no major change in the indicators for the period ended 18th September, India’s electricity consumption for the week was 4% greater compared to the similar period in FY20.

In the week passed by, India’s defense minister Rajnath Singh reiterated on protecting India’s sovereignty on the back of attempts by the Chinese army to unilaterally alter the status quo. The central government announced its plans on banning cryptocurrencies as the virtual currency poses a serious threat to India’s economy and national security. A parliamentary panel recommended that the LTCG tax be abolished for investment in start-up companies. There was an improvement in advance tax collection as the collections contracted by 25.5% to Rs 1,59,057 crore as compared to 76% in the 1st quarter of FY21.

India’s trade deficit widened to a 4-month high in August as exports fell at a much faster pace than July. Exports for the month of August stood at $ 22.7 billion, a decline of 12.6% year on year, greater than July’s 10.2%. Imports, too contracted, however, at a slower pace than July. While the contraction rate of imports has reduced, exports have registered a faster pace of contraction than the previous month. 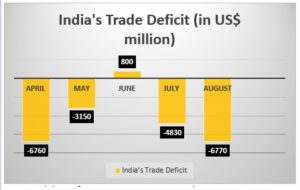 In the months to come, India’s export performance is expected to get better with countries that have fared well in handling the spread of the virus. Exports to China, Malaysia, and Australia are expected to grow, while exports to the US may remain under pressure. On the import front, sluggish moves in oil prices may lead to a significant decline in imports from oil majors such as UAE, Saudi Arabia, etc.

With lower tax revenues and a greater need for spending, India’s borrowing increased by a whopping Rs 7 trillion in the first quarter of FY21 as the union government now owes Rs 101.4 trillion to various lenders.

India’s sovereign debt (domestic and external liabilities), which currently stands at 43% of India’s GDP is expected to reach the levels of 60% by the end of FY21. The 2017 FRBM rules had recommended that the Sovereign debt is brought under 40% of GDP by FY23. 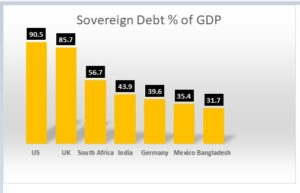 Will The Farm Bills give the Much-Needed Thrust to Rural Farm Income?

On 20th September 2020, after a much ruckus by India’s opposition parties, Rajya Sabha passed the two farm bills marking landmark reforms in the farming sector.

The Farmers (Empowerment and Protection) Agreement on Price Assurance and Farm Services Bill, 2020 relates to enabling the facility of contract farming which will eventually help the farmers to tie up with large agri-business firms, retailers, and exporters at a pre-determined price. The bill eliminates the compulsory middleman who controlled marketing for farmers.

The Farmers’ Produce Trade and Commerce (Promotion and Facilitation) Bill, 2020 gives the farmers the freedom of choice to sell their produce at their preferred location.

Experts have linked the passing of two major farm bills with those of 1991 economic reforms. India might have finally started treating farming and agriculture like any other business. In the years to come, there are signs that these reforms will make India’s farmers self-reliant, given that execution and implementation by local and state governments are smooth.

A panel of 3 constituted by the WTO in its report concluded that the US violated the trade rules by levying tariffs on more than $550 billion worth of goods in 2018.

Citing the risk of detention by the Chinese authorities, the Donald Trump administration issued a fresh warning against travel to China and Hong Kong. The US went a step ahead and banned the import of cotton, hair products, computer components, and textiles from China as these items were made using forced labor.

With tensions rising between the US and China, the global stock markets might experience volatility in the short term as China remains a major focus during the US Presidential elections.

Coming Up in the Week:

Tavaga & Trade Smart has issued this report for information purposes only. This is not an investment document.

Please refer to https://tavaga.com/terms.html for disclosures.