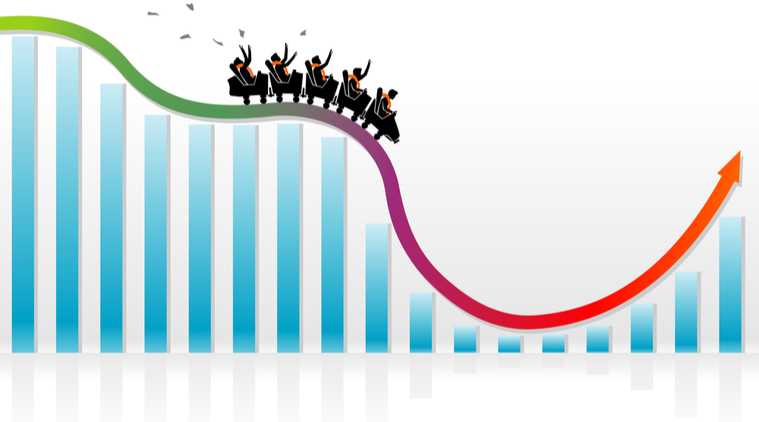 Undoubtedly the biggest event of the year as far as Indian financial markets are concerned is behind us. The annual budget has been presented, stock markets have digested it and are now looking for an eventful year ahead.

Top events of 2018 & its impact on online trading market

The year 2018 is especially important for Indian stock markets as the country prepares for an election in 2019. Touted as the mother of all elections, the market is clinging to every bit of news flow and reacting to it. But along with the general elections in 2019, there are other events that are lined up during the year which is expected to make 2018 an eventful year.

We look at 10 themes that will be played out during the year. Risk, after all, comes from not knowing what you’re doing said the legendary stock market investor Warren Buffett. It’s better to at least be aware of the events that are likely to unfold going during the year and try to position oneself accordingly.

1. State elections: While all eyes are focused on the general election of 2019, the tone will be set by the state’s elections in 2018. As many as eight state elections are taking place during the year, including important and large states like Karnataka, Madhya Pradesh, Rajasthan, and Chhattisgarh. Stock market traders will start taking sides based on the outcome of these elections. A victory for the ruling party in the center, BJP will be taken positively by the market, while any shocks, especially in BJP ruled states will make stock markets nervous.

2. Inflation: Perhaps one of the most keenly watched numbers, both by the economists and the government is inflation, this will be especially true in 2018. A rising inflation would mean that the Reserve Bank of India will have to act to either increase interest rates or control liquidity in the economy. Rising interest rates will not only be bad for the economy and the market but will reflect poorly on the government as it will be in election mode for the most part of 2018. Higher inflation, in any case, is bad for the market.

3. Growth: The government has been betting on growth picking up in 2018. Its calculation of timing of demonetisation and implementation of Goods and Service Tax (GST) was based on not rocking the boat in 2018 and allowing the economy to pick up the pace. Given the quarterly numbers in December and the policy statement in the recently concluded credit policy, signs of growth and pick-up in investments are visible. Historically, election years are good for growth as political parties use the money to flood the market. The government would need growth to push up employment numbers ahead of elections.

4. Monsoon: One of the most critical factors that will decide the mood of rural India is the monsoon. The country is still largely dependent on monsoon. Ironically, over the last few years, it has been observed that rural economy gets affected even if monsoons are good. This is because prices of agriculture produce fall as the products hit the stock markets. The government in the current budget has announced linking all kharif crops pricing on a cost plus a minimum of 50 percent return. While this might work in case monsoon is good, in case of poor monsoon there are fewer options. Consumption and overall rural growth will be affected by poor monsoon.

5. Government borrowing: A key data point that the market will be watching is government spending. Government spending will be closely dependent on tax collection, especially GST collections. A lower collection would mean higher borrowing which in turn would impact interest rates. It may be remembered that by mid of 2017 interest rates started shooting up after it was clear the government borrowing will be overshooting the budgeted ceiling. By the mid of 2018 the picture will get clear on government’s borrowing program.

6. Crude oil: One of the biggest unknown in the entire calculation of the government mathematics is crude oil. Oil prices had moved up to $71 a barrel, which is at the upper end of government’s comfort zone. The government has been cutting down taxes in order to minimize the impact of crude oil on the common man. But in doing so it is hurting itself by way of lower tax collection. Recent inflation numbers show the impact of crude oil. Any increase above the comfort zone would have an all-around impact on the economy.

8. Global economy: Appreciable growth is visible in most countries of the world, led by the USA. Higher oil prices have helped the oil-producing countries while higher commodity prices have helped most economies that produce them. Indirectly these economies have helped growth in other countries as they saw a pick-up in demand. Stock markets have been touching new highs globally on back of growth numbers. Any shakeout would have a severe impact on the stock markets.

9. Global interest rates: The euphoria in the equity markets is matched by the nervousness in the global bond markets. India too has seen bond yields rising on account of both domestic as well as global issues. The year 2018 will be an important year for the bond markets and world economy as many countries will be pulling back liquidity from the system. The USA is already sucking out liquidity by stopping its quantitative easing program. Eurozone and Japan, the other main sources of liquidity in the world market are expected to shut the tap sooner than later. Withdrawal of money from the bond market will have an impact on interest rates and thus all financial markets as the liquidity influx over the years have largely found its way in the financial markets.

10. Brexit: The biggest unknown for the world economy is how the United Kingdom, one of the biggest economies in the world will pull out of the Euro Zone. Though the people of Britain have voted to come out of the zone, known popularly as Brexit, its government has not been able to find a way that will not hamper its growth and have a minimum impact on the economy. Britain, in fact, is one of the slower moving economies in the developed world as companies have started moving out of the country. The question in world markets is, will Brexit be smooth and slow or will it be a hard landing which can again push back the country and many economies related to it by many years? A hard landing will be bad for all markets as many years would be lost to realign to new developments.

The year 2018 has volatility written all over it. Foreseeable events itself are enough to rattle the stock markets but any unforeseen ones can be drastic. To start stock trading with lowest brokerage charges, open demat account and trading account with us and get the benefits from volatile stock market.