Welcome to the 11th edition of our weekly musings!

With a surge in coronavirus infections and deaths across the world, the pandemic is making its presence felt as the global economy continues to witness uncertainty amidst the second wave. The variations in the recovery and revival of the economy are visible through the economic data of developed markets. While Europe continues to witness a rising unemployment rate and trade deficit, the US high-frequency data indicates an environment of declining unemployment and rising exports. As the fresh stimulus in the US has come to a standstill, with reports suggesting it being pushed back until the end of February 2021, the growth outlook of the global economy remains uncertain and unpredictable.

The macro indicators in India are encouraging. A consistent improvement across all economic activities on a month-on-month basis and in some cases, year-on-year as well, is stimulating in itself. The month-to-date electricity consumption was up 8% up to 11th November, against a similar period in 2019; PV and 2-wheeler registrations are up sequentially however, the registrations were down on a year-on-year basis due to the early festivities in 2019 (Both Navratri and Diwali were celebrated in October). The hiring freeze and involuntary attrition by industries remain a worrying factor as the Naukri JobSpeak Index indicates a flat growth m-o-m, with the index down by 27% from the pre-Covid levels.

One more stimulus; Similar Story – No signs of a real consumption booster

The estimated benefit of the Pradhan Mantri Garib Kalyan Package (PMGKP), the first two stimulus packages under the ‘Atmanirbhar Bharat Abhiyaan’, the extension of the PMGKP, and this package is around Rs 17.7 lakh crores (8.7% of GDP), however, the actual fiscal outlay could reach up to a maximum of Rs 4.7 lakh crores (2.3% of GDP).

Some notable announcements such as allocating Rs 100 billion more towards the MGNREGA scheme, a subsidy in EPFO installments worth Rs 60 billion towards fresh hiring and for those who lost the jobs between 1st March – 30th Sept 2020, and additional spending of Rs 180 billion towards the PMAY-Urban category are some well thought out moves that could directly benefit the urban as well as the rural class.

While a stimulus is intended to give direct cash/commodity support in order to promote spending on all the essential as well as non-essential items (including discretionary spending), the actual cash injection has been dismal. Stimulus 3.0 focused on providing clean credit to MSMEs (no requirement of collateral, the government being the guarantor), with outstanding loans getting more time to repay the principal and interest amount.

However, government data shows the tepid response of lenders towards this credit guarantee scheme. To date, out of the loans worth Rs 3 lakh crores announced for the MSMEs, only 1.5 lakh crores worth have been disbursed due to reasons such as – Not much interest shown by entrepreneurs due to the bleak outlook caused by the Covid-19 pandemic and the conservative approach followed by banks to maintain healthy financials.

A summary of announcements:

For the central government to inject cash directly into the pockets of its citizens, it could either raise its borrowing or target more revenue via disinvestments. Tax revenue collections have been drastically hit due to the stringent lockdowns at the beginning of FY21, which also caused the contraction in India’s GDP during the April-June quarter.

As per the RBI’s Nowcast report, the central bank estimates the Q2 performance to marginally improve as compared to Q1, but could enter into recession as it expects the output to shrink by 8.6%. 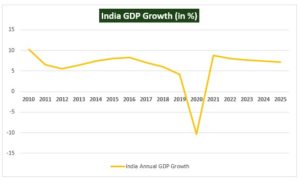 The IMF forecasts suggest India to shrink by more than 10% in this FY, from the earlier estimates of 4.5%. With India’s high-frequency indicators showing consistent improvement since Q2 of this FY, the multilateral financial institution expects India to grow fastest in FY22 at 8.8%.

The Asian markets rose on Monday morning as Asia-Pacific nations, barring India, signed the Regional Comprehensive Economic Partnership (RCEP) agreement. The agreement that was signed after 8 years of negotiations, gradually aims to reduce tariffs across sectors as nations would have to ratify it within 2 years before the RCEP comes into effect.

India, one of the largest consumption-driven markets in the world, abandoned the talks in 2019 amid rising protectionist sermons from those in power as they feared the markets to flood with imports that could eventually be detrimental to India’s local manufacturers. The government, in its recent budgets, has even raised the tariff on imports signaling its autarkic agenda.

However, with stronger than ever foreign relationships, the other participants have indicated that doors of the RCEP treaty would always remain open for India.

In the past, the Indian consumer has gained access to high-standard and cheap goods like edible oil (through free trade) whose price volatility has caused fears in Indian households and the commodity has also significantly contributed to the CPI. With new supply-chains being explored by the developed markets amidst the Covid-19 pandemic, it remains vital for India to not miss out on an opportunity that could fuel growth and create more jobs.

While RCEP is one of the free-trade agreements that India pulled-off from, there are several other FTAs where India could capitalize upon. E.g.: The EU-India trade agreement is long overdue and not many developments have taken place, while Vietnam ratified its own treaty with the EU post the coronavirus outbreak.

Tavaga & Trade Smart has issued this report for information purposes only. This is not an investment document.

Please refer to https://tavaga.com/terms.html for disclosures.