Welcome to the 17th edition of our Weekly Musings!

The Indian economy, after facing a severe blow in the first quarter of this financial year, is unquestionably recovering at a faster pace than anticipated earlier. Whilst the high-frequency indicators have shown some dip from their recent highs during the festive season, most of them would continue to do well subject to various factors such as – continuity in easy financing to businesses, bringing-in new reforms by central and state governments, and not shutting down the economy. 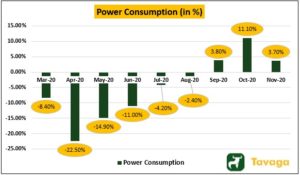 If the economy maintains its current momentum, the bounce back in Q4 will be stronger as the RBI in its latest bulletin shed a light on how the economy is pulling out of Covid-19’s deep chasm.

In the initial months of lockdown, the decline in the global economy was so scary, filled with uncertainty, that the projections were disappointingly terrible with no signs of cheer even after considering the path towards normalization at the end of this distressing phase. However, the policy response by central banks, globally, was humongous and enough to douse the fire in many economies.

While the coronavirus has caused various waves in almost all the economies, barring China (surprising, because this is where the virus originated!), the general economic activity has been restored with lesser permanent damage to the system than envisaged earlier.

1. Consumers
a) Well-off consumers
b) Consumers more susceptible to a standstill in economic activity

2. Companies
a) Medium to large-sized companies
b) Micro and small companies

India’s informal category continues to suffer due to the panemic

When the general economic activities came to a standstill, larger companies had to halt their productions while the capacities were secured till normalcy got restored. Similarly, high-salaried consumers while keeping their purchasing powers unscathed, had to temporarily stop the discretionary spending and save more.

As the economic activities were restored post the first quarter of this financial year, the larger companies unleashed their firepower and intensified manufacturing in the production facilities. Likewise, the affluent class of consumers also resorted to ‘revenge spending’. Behaviors such as these led to a spike in consumption and production activities in the economy and this is the data that always gets captured in the initial stages while calculating economic data.

On the other hand, the micro and small companies, along with the consumers more susceptible to the economy were considerably impacted than the well-off consumers. Moreover, the vulnerable class of consumers who were largely affected due to this pandemic, was already under severe stress even before the virus came into existence.

Therefore, if we take collective effects into consideration, the purchasing power of a large chunk of consumers must have gone down along with a permanent shutdown of many small companies. While this data is difficult to capture at the early stages (due to it being informal), it could well begin to reflect once the pent-up phase subsides.

As the week came to an end, the global stock markets got reasons to cheer, as on late Sunday night, US President Donald Trump announced of him signing the much-debated and awaited Covid 19 relief and spending bill.

The $900 billion pandemic relief package that was ratified by President Trump will avert the government shutdown and help in delivering the long-desired cash in the hands of individuals and businesses affected.

With this, the Asian markets opened in green as Japan’s Nikkei rose 0.6%, SGX Nifty was up 100 points and the MSCI Index ex-Asia also remained in the green. Nifty 50 futures breached the 13,900 levels for the first time as positive triggers continued to flow into the global markets. With the Brexit deal and relief payment announcements, the S&P 500 VIX (Volatility Index) also declined by more than a percent. 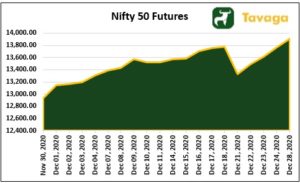 The US Relief Package was after the news of political divorce with mitigation announcement by the British PM Boris Johnson. The longest political separation is finally in its final stages as the UK and EU have both agreed to a Brexit treaty, and now, only the acceptance of governments across Europe remains.

For industries in India, the current Brexit treaty will allow them to continue to treat the United Kingdom as their investment entrance into Europe. However, India was never excited about Brexit as it derailed and weakened the Western unity and gave China, the much-needed geopolitical gain and impetus. With Britain’s latest hard stance against the Chinese CPC (Communist Party of China) and its desire to disassociate from Europe, it could be pivotal for India to grab an opportunity and be at the forefront for economic partnership deals in the region.

Will Gold Continue to Glitter in 2021?

As the year comes to an end, the yellow metal is all set to clock the best gains in a decade this year. The rally in gold started globally this year with the pandemic-induced lockdowns showcasing a somber outlook for the global economy.

The volatility in other asset classes (Crude and Equities) provided a further boost to the prices of gold. 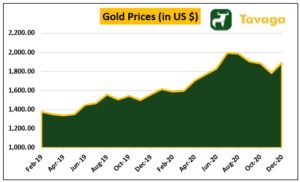 Despite the benchmark Sensex and Nifty surging more than 80% this year, the yellow metal outperformed these indices by more than 20% due to its safe-haven nature as investors sold risky assets in March and April and parked their money in relatively safer assets. The surge in gold prices this year came after the 18% jump in 2019 and a decline of 1.5% in 2018.

Post-re-opening of the economies globally, gold continued to rise and was accumulated on dips every time, because of the prevailing uncertainty in the emerging and developed economies.

As 2020 ends, there is still uncertainty surrounding various new strains of coronavirus and the availability of proper vaccines. As the world enters into 2021, the interest rates across the globe are at an all-time low. In India as well, the real rates are negative, with inflation hovering around the 7% range for months now. Moreover, the loose monetary policy coupled with geopolitical tensions surrounding the US-China trade war and India-China border clashes could be some of the tailwinds for the gold to rise even further.

Investors should take a sizeable exposure (depending upon the risk appetite) to gold via gold ETFs and sovereign gold bonds.

Coming Up In The Week:

Through the Trade Smart-Tavaga partnership, both companies intend to democratize investment advisory and cater to investors’ goals and needs through more transparent and efficient investing.

Tavaga & Trade Smart has issued this report for information purposes only. This is not an investment document. Please refer to https://tavaga.com/terms.html for disclaimers.