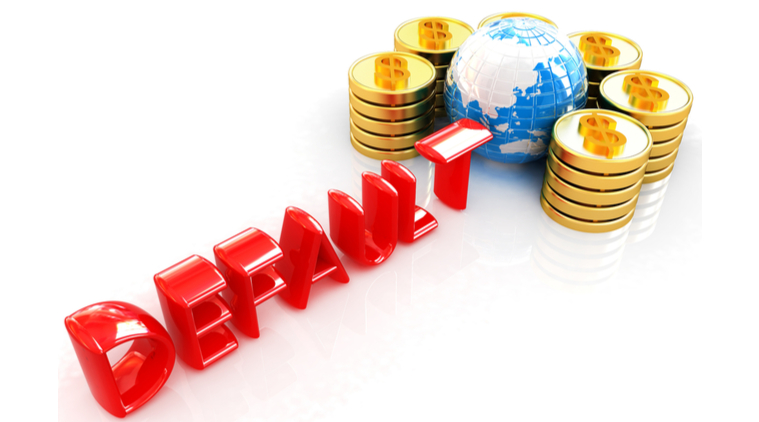 Recently we came across the below insightful article in Mint by Mr. Nilesh Shah, Axis Direct and thought of sharing it with you all.

My daughter recently asked me if the US was going to default. I explained that if we went by the US version of history, we’d believe that they have never defaulted and therefore will not default even now. But what happened on 15 August 1971 suggests that this version of history may not be the correct one.

Let’s go back in time to just after the Great Depression. Global growth was muted due to constraints imposed on international trade and capital flows. Most economies followed a “beggar thy neighbour” policy of currency devaluation to gain export competitiveness, creating trading blocks, currency zones and bilateral barter mechanism. In such an environment, post-World War II, 730 delegates from 44 allied nations met at Mount Washington Hotel in Breton Woods in July 1944 to create a new international monetary system. John Maynard Keynes led the English thought process of creating a super central bank with an ability to print world currency called the bancor. Keynes (from the experience of war debt on defeated nations in World War I) proposed that the burden of trade imbalance should be shared between surplus as well as deficit countries. Harry Dexter White leading the American thought process prevailed over everyone to safeguard the interest of the US as the largest creditor nation.

Bretton Woods established a system of payments in which all currencies were defined in relation to the US dollar. The US committed to convert dollars into gold at a fixed peg of $35 per ounce. In simple terms, the US dollar replaced gold as the standard and became the reserve currency for global trade. The International Monetary Fund (IMF) and the International Bank for Reconstruction and Development were created to facilitate free flows in trade and capital. Bretton Woods created a regulated system of fixed exchange rates indirectly disciplined by the US dollar which was tied to gold.

No one objected to the dollar as the reserve currency as the US produced more than half of the global manufactured output, had more than 574 million ounces of gold to back the dollar and US support was needed by war-torn economies of Europe and Japan in the form of cash, market access and technology. The commitment given by the US that every dollar overseas was convertible into gold at a fixed peg of $35 per ounce was believable as the gold reserve covered more than 55% of the dollar stock. The interest earning capability of the dollar acted as an additional incentive.

Differences in trade were to be bridged from national monetary reserves and short-term facility from IMF. A prior approval from IMF was required to change parity value of currencies beyond 10%. The economies of Japan and Europe recovered with strong support from the US under the Marshall Plan. A fixed exchange rate removed the barriers of trade blocks and currency devaluation on global trade and capital flows. The world returned to a high growth path. The US benefited no less as it could carry out massive expenditures across the globe to support its political and military objectives or within the US to support social spending. As long as other nations were willing to hold the dollar (without converting it into gold) the US was in a safe position to dominate the global economy.

However, from 1950 to 1969, as Germany and Japan recovered, the US share of the world’s economic output dropped significantly, from 35% to 27%. Furthermore, growing public debt incurred by the Vietnam War and Great Society programmes and higher inflation caused the dollar to become increasingly overvalued in the 1960s. This resulted in higher trade deficit for the US. It also meant that the US had to print more dollars to supply to other nations. The gold coverage ratio started declining rapidly throughout the 60s.

In 1961, 8 nations came together to create London Gold Pool. This was a mechanism whereby gold could be sold from the contributions of member nations to cool off the open market prices which can threaten the peg of the dollar to gold. Special drawing rights were created by IMF for member nations to ease pressure on the dollar and support gold peg.

The Cuban missile crisis pushed gold prices to $40 per ounce in 1962. Many nations converted their holding of dollar into gold to take advantage of arbitrage offered between open market price and peg price. The drain on US gold reserves culminated with the London Gold Pool collapse in March 1968.

Then-president Richard Nixon passed executive order-11615 on 15 August 1971 unilaterally declaring the abandonment of the dollar peg to gold. No prior consultation happened with IMF. No approval was taken from nations holding dollar. No option was given to nations who were holding dollars on the explicit commitment of the US on the gold peg. There was no choice but for dollar holders to believe the credo “In God We Trust”. In one quick swoop, pine trees with some green colour became billion dollars without the backing of gold. The US brilliantly packaged this programme not as dereliction of commitment but taking charge of the world. The US turned the dollar’s collapse, which could have appeared shameful, into a moment of hubris. What came to be called the “Nixon Shock” was a huge success for the US. The Dow rose 5% in next two days registering its biggest daily gain ever at that point. The Nikkei lost 20% as an immediate reaction. Though over next 18 months the yen appreciated by 26% and Nikkei went up by 96%. Global growth recovered despite the Nixon Shock and subsequent oil shocks and stagflation of 70s. Markets prospered and marched ahead. I reassured my daughter with the above piece of history that she need not worry about the US default. That would be averted, one way or the other.

End note: The US government has shut down 18 times in last 30 years and it has raised debt ceiling 80 times since 1960. No wonder the US is rated A- by Dagong Global Credit, a Chinese rating company.